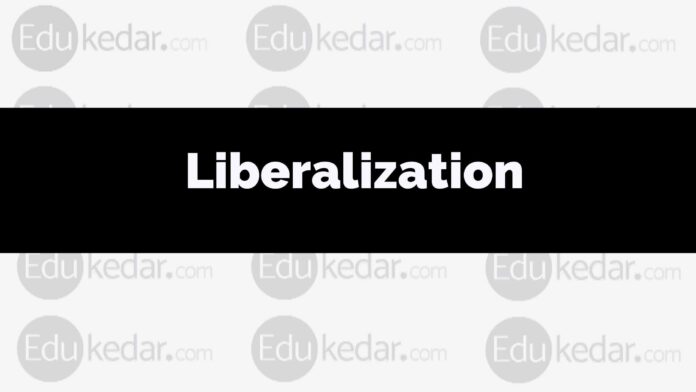 Liberalization refers to the relaxation of the previous government restriction usually in the area of economic policies and business activities. Here we have shared information about Liberalization such as the Liberalization definition and its Reforms in NEP 1991.

Liberalization was introduced in the New Economic policy of 1991. Liberalization is a process whereby a state lists restrictions on some private individual activities are removed.

Liberalization occurs when something which used to be banned is no longer banned, or when government regulators are relaxed.

In other words, Liberalization is the process of Removal of restrictions on entry and growth in the private sector.

There are 5 Reforms In Liberalization. For boosting the economy under liberalization reforms were made are as follows;

It was all about the money and how financial freedom has been given to the economy by which business will improve more.

(a) Change in the role of RBI

Firstly the role of the RBI was to regulate all the rules and regulations that were made by the RBI and now its role is a facilitator. The RBI was told that they have to provide facilities to the bank instead of controlling them. RBI will be the supreme, approx but their role is not to regulate the banks, it helps the banks to increase in trade in their work.

(b) Origin of private banks

Now private banks were also there whether Indian banks or Foreign banks like ICICI banks. It was the biggest step after liberalization. It has changed everything beneficial for all.

(c) Increase in the limit of foreign investment

In the financial sector, the foreign investment limit was 51% and that from outside the mutual funds and all limit was 51%. Firstly, that was very low because they were promoting domestic business. In this, there were no investors, no growth so they have to increase the limit from outside.

(d) Ease in the Expansion process

These are related to foreign exchange the money which comes from outside Import and Export.

(a) Devaluation of Rupee

(b) Market determination of exchange rate

The exchange rate was given freedom that it can be set by market forces it will not be set by the government. In front of the rate in equilibrium will be known as the market exchange rate.

(a) Reduction In Industrial Licensing

The license which was given by the government for expansion, business setup was reduced to the very extent. It played an important role in an increasing number of industries. We can see many numbers of private industries because of this only because it was not that much tough to take a license.

(b) Decrease in the role of the public sector

And these 3 industries were:

The reservation for small-scale industries was also reduced and the investment limits were increased. There was freedom for Small- scale industries and everything was open.

(a) Reduction in taxes

In this, the tax has to be paid less because the government knows there will be more theft if the rate of tax will be high. It was done because the people will pay tax on time. The tax was not removed it was moderated that everyone will pay the tax.

(b) Simplification of Process

With the reduction of taxes simplification of the process was also done. The structure of paying tax was very complicated now it was changed simplified. Many changes were done to Import.

(a) The removal of quantitative restrictions

(b) Removal of export duties

For promoting export there was a need for the removal of export duties. That we can do more exports and more foreign exchange will come.

There was a reduction in import duties also because we can get a good quality of capital goods, we can import machines, can do the production. India is a labor-oriented country we have a huge amount of labor. What we will do with those labor when we don’t have the technology, resources. Due to this, the freedom was given that from outside we can export machinery.

The license which was required for import that process was also simplified by many things the license was removed but where ever there was licensing it was very simplified.