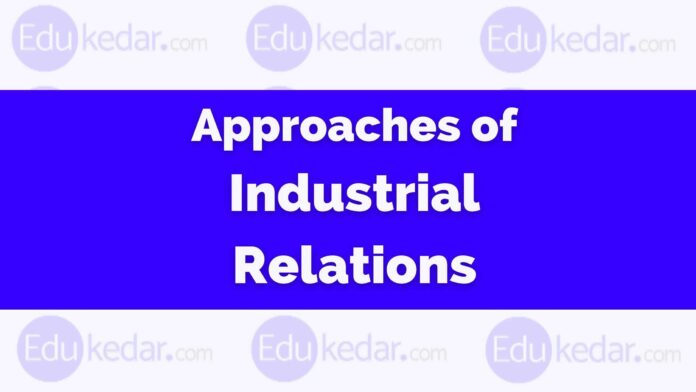 The approaches of Industrial Relations help in understanding the nature which ensures cordial relationships between workers and employers and also provides a proper mechanism to manage industrial disputes and conflicts.

Industrial relation is an integral part of human resource management that studies the formal relationship of the workers with the administration and the employers in an industrial setup.

The important approaches to industrial relations are as follows:-

The above mention approaches to industrial relations are explained in detail one by one below.

In this approach, the management is considered the main authority for decision making and it is also responsible for ensuring peace and harmony in the organization.

This theory believes that workplace conflict is temporary in nature, and is a result of improper management in the organization.

The unitary approach discourages conflict in the form of strikes which is not only regarded as necessary but destructive.

The advocates of the unitary approach emphasize direct negotiations with employees and they are not in the favour of intervention of government, tribunals, and unions in the resolution of disputes.

The Important aim of the unitary approach is as follows:

The pluralistic approach assumes that the organization is consist of individuals who form distinct groups with their own set of aims, objectives, leadership styles, and value
propositions and this kind of multi-distinct groups are responsible for the continuous scope for conflict.

As per this approach, the legitimacy of the management’s authority is not automatically accepted, and stability and peace in industrial relations as the product of concessions and compromises between management and unions.

It considers the workplace conflict between management and workers as rationally beneficial and inevitable and conflict is viewed as necessary for innovation and growth.

A pluralist approach to industrial relations supports the intervention of the government or state in order to protect the interest of employees through laws and industrial tribunals which provide orderly processes for the resolution of conflict.

The Marxist approach is also known as the ‘Radical Perspective’, and as the name suggests it is based on the ideas of Karl Marx.

The core of the Marxist approach is based on the idea that the economic activities of production and manufacturing are major controlled by capitalists whose only objective is to maximize their profit and exploit the workers.

Marxists also regard conflict between employers and employees or those who own the means of production and those who have only their labor to offer as inevitable and it is a result of the unfair treatment done by capitalist society to workers.

The Marxists always support that class conflict because it is required to initiate social change which bridges the gap between the economically settled owners of factors
of production and the economically dependent worker class.

This approach supports the formation of trade unions as they saw as an effective force that protects the workers from exploitation by capitalists and also considered as a weapon to bring about a revolutionary social change.

In his book Industrial Relations Systems, John T. Dunlop gave the systems theory of industrial relations in the year 1958.

According to John. T. Dunlop that every human being belongs to a continuous but independent social system culture that is responsible for shaping his or her actions, behavior, and role.

The system approach of industrial relations was based on a joint function of all the different variables:

John Dunlop’s Systems Approach Formula based on different variables are

The sociological approach to industrial relations considers industry as an inseparable part of society.

A society is consist of different people who have many differences in their family background, attitudes, skills, education level, perception, personality, interests, likes, and dislikes, and these differences not only affect management vision, mission objective, employee attitude, and perception but are also responsible for workplace conflict.

According to the sociological approach, society impacts various work environment factors that are economic, technical, and political factors of an enterprise and these determine what kind of relationship is shared by the employer, employees, institutions, and government bodies.

As the name suggests this approach was proposed by Mahatma Gandhi or Mohandas Karamchand Gandhi.

The Gandhian approach to industrial relations perceived that every Industrial organization is a joint venture of employees and employers and the employees should be treated as associates or co-partners in the business.

Gandhi Ji was not against strikes instead, he was a supportive attitude toward strikes.

According to theory opinion, strikes should be carried out in a completely violence-free manner and it should be treated as the last option the workers adopt, after the failure of all the constitutional and peaceful ways of resolving conflicts and negotiating with the employer.

Gandhian’s approach is focused on increasing production and gains from production should be shared with the employees whom it has been possible.

Gandhi Ji also emphasized that industrial disputes between the employer and employees should be resolved healthily through interactions, arbitration, and bilateral negotiations.

As per the psychological approach, the main reason behind industrial disputes is the different perceptions and mindsets, lack of trust, and negative feelings among the key participants of industrial relations i.e., the employees and the management.

This negative perception about each other not only affect economic but also non-economic factors, like power, position, recognition, beliefs, education, social security, and income of the individuals.

All factors create a tense interpersonal relationship leading to conflicts that ultimately hinder the image and interest of the individuals involved.

This approach to industrial relations was given by the late President of India Shri V.V. Giri who was a renowned politician and trade union leader.

The Giri approach emphasized the importance of collective bargaining and mutual negotiations between management and labor should be used to settle industrial disputes.

He suggested that every industry should set up bipartite machinery to resolve the industrial conflict and this bipartite committee consist of both management and trade union representatives.

Giri’s emphasized the voluntary efforts of the management and the trade unions to resolve their differences, through voluntary arbitration, and collective bargaining rather than compulsory arbitration.

This approach analyzes the behavior of individuals and groups at the workplace and also helps in modifying individual behavior toward the accomplishment of organizational objectives.

This school of thought highlights all the aspects of human behavior that ensure individual integration motivation, teamwork, productivity, and cooperation with management.

The human relations approach stresses certain policies and techniques that are vital for improving employee morale, efficiency, communication, the workplace as a social system, group dynamics, and participation in management and job satisfaction.

This approach outlines all the attributes that determine the labor-management relations which may arise from industrial disputes or conflicts like job and social security, good pay and working conditions, recognition, participation in decision-making, etc.

What is Offer and Acceptance? Meaning, Define Example ICA 1872