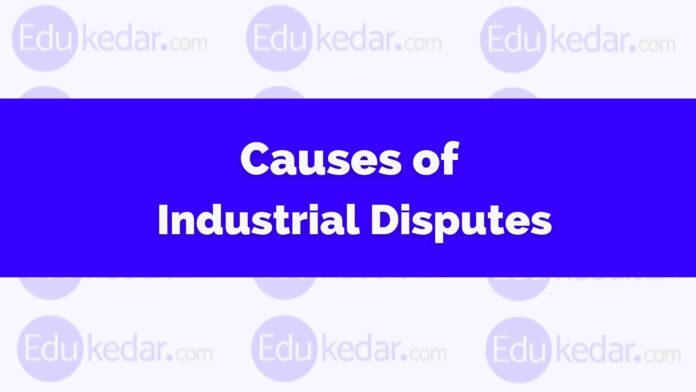 ► What are Industrial Disputes?

An industrial dispute is defined as the disagreement or conflict between an employer and employees regarding pay, unfair labor practices, recognition, other working conditions problems, etc.

Industrial disputes mainly arise due to strife between employees and employer and this strife become wider due to the diverse interest of both employee and employer. The employees are interested in higher wages, and good working conditions and want to right to express or have a voice in management whereas an employer is more interested in profits, productivity, quality, and control of cost this conflict of interest maximizes the possibility of industrial dispute.

In simple words, industrial disputes mean a kind of difference or a conflict in opinion between employers and workers. This small difference of opinion or dispute may result in lockouts, strikes, bandhs, retracements, and layoffs which directly affect production, profit, loss of market share, or sometimes it led to the closure of the plant.

The common causes of industrial disputes are –

All the above causes of industrial dispute are explained in detail one by one.

The most important cause of industrial disputes is wages. There is always a conflict exists between management and employees related to determining employee wages.

Inflation and increasing cost of living results in demand for high wages which is responsible for the industrial dispute.

Employees always want allowances, incentives, and bonus so they can satisfy their financial and non-financial needs but high allowances and bonus create an extra burden on company revenue so the company does not want to pay higher allowances and bonus which result in the never-ending conflict between the organization and employers.

Another important cause of industrial disputes is regular layoff and retrenchment.

✔ Violation of rules or codes

One of the important factors that cause industrial disputes is the violation of rules and codes by both management and workers.

If businesses want to operate peacefully then they should follow the rules and regulations in letter and spirit.

The organization uses unfair labor practices such as pressure on employees when they try to exercise their rights to organize, take part in union activity, refusing to bargain, recruiting new employees during a strike which is not illegal, creating an environment or actually creating an act of force or violence or stop communication, etc.

Recognition Disputes arise when the management of an organization unwillingly to
recognize a trade union for the purpose of collective bargaining or to represent its
member employees in case of a conflict or dispute.

Management generally does not want to talk to the trade union over any industrial disputes with representatives of the trade union therefore management deliberately refuses to accept that trade union for the purpose of negotiations or bargaining.

✔ The authoritarian or autocratic attitude of management

The authoritarian attitude of management is considered a root cause of industrial disputes. Management has complete control over regulation or decision-making and undermines the authority of trade unions.

The management uses excessive power to gain absolute control over workers which curbs the rights of workers, and their autonomy, workers do not have any say in decision making and the worker feels they are treated as a salve.

Also Read : What is Industrialization?

► Methods for the settlement of Industrial Disputes

The various methods available for resolving industrial disputes are-