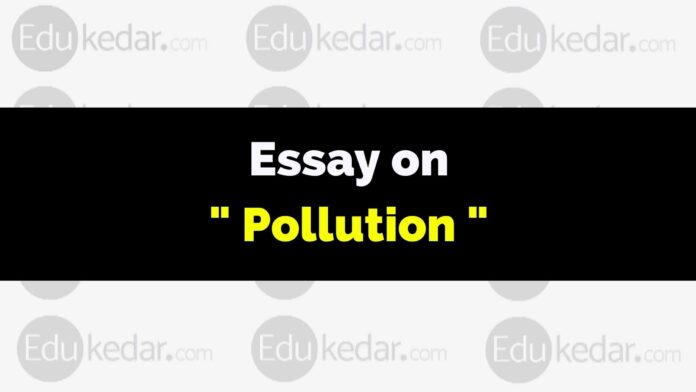 Pollution is known as any undesirable change in physical, chemical, or biological characteristics of air, water, and any part of the environment. Here in this article, we have explained the topic of pollution in detail so you can use it in your essay on pollution.

Topics Covered in this article are as follows;

Pollution has become a major concern today. Man has interfered too much with nature. As a result, the environment including air, water, soil, etc… has been polluted.

If the environment is polluted, all sorts of life- human, animal, and vegetation are affected directly or indirectly. It is the introduction of harmful substances or pollutants into the environment.

Pollution can be defined as the introduction of contaminants into an environment that causes instability, disorder, harm, or discomfort to the ecosystem i.e. physical systems or living organisms.

Pollution can take the form of chemical substances or energy, such as noise, heat, or light.

Pollution has been defined as the “adverse effect on the natural environment. including human, animal or plant life or a harmful substance that does not occur naturally, such as industrial and radioactive waste, or the concentration to harmful levels of naturally occurring substance such as Nitrate.” – Robinson M (1996, Ecological Principles and Environmental issues)

Environmental pollutant means any solid, liquid, or gaseous substances present in such concentration as may be or tend to be injurious to the environment. – Sec 2(b), Environment Protection Act 1986

Pollution is the addition of various materials as a result of human activities to the environment and usually exerts a harmful influence on the environment. – RTM Sutanmihardja

An environment is called polluted if it has several elements, including; (1) if a substance, organism, or other elements such as gas, light, or energy has been mixed into a particular resource or environment. (2) and therefore inhibit or interfere with the function or designation of these resources or the environment. – Otto Soemarwoto

Also Read :What is Sustainable Development?

There are mainly 4 kinds of pollution that are as listed below;

Air Pollution is brought about by the smoke of industries, manufacturing plants, engine vehicles, smoking, and consuming waste. Air pollution influences our well-being, it causes hacking, asthma, and other lung illnesses.

Air pollution refers to any physical, chemical, or biological change in the air. Pollution is the contamination of air by harmful gases, dust, and smoke that affects plants, animals, and humans drastically. There is a sure level of gases present in the environment. An expansion or reduction in the arrangement of these gases is unsafe for endurance.

It is said to occur when toxic pollutants and particulate matter are introduced into water bodies such as lakes, rivers, and seas. Their contaminants are generally introduced by human activities like improper sewage treatment and oil skills.

Water Pollution is the tainting of water bodies (like seas, oceans, lakes, waterways, springs, and groundwater) typically caused because of human exercise.

Water pollution is any change, minor or major in the physical, substance, or natural properties of water that ultimately prompts an unfavorable outcome for any living creature.

A portion of the water pollution is brought about by direct Sources, like plants, which squander the executive’s offices, treatment facilities, and so on, that straightforwardly deliver squander and risky results into the closest water source without treating them.

Circuitous sources incorporate contaminations that implant in the water bodies using groundwater or soil or using the climate through acidic rain.

It portrays the tainting of soil because of the presence of harmful substances like unreasonable utilization of manures and pesticides, deforestation, modern waste, and so on…Soil pollution is an element that is utilized for the decay of soil because of surface, mineral, or quality substance of soil is decreased.

Additionally, this upsets the natural equilibrium of the living beings dependent on the dirt. Also, there are antagonistic impacts of soil contamination on the development of plants.

Normally, soil contamination is caused because of the presence of man-made applications like the permeation of tainted surface water, pesticides, fuel unloading, oil unloading, and so on.

It is dangerous to life. It is said that 85 decibels cause deafness and other diseases. The common reason behind noise pollution is the sound that comes from industry, planes, and other sources that reach beyond the permissible limits.

Noise pollution is a type of pollution that has become destructive these days.

This pollution is expanding just and establishes a hazardous climate. Commotion contamination is the point at which the degree of noise increments more than the typical level.

Whenever how much clamor surpasses, it becomes risky for living creatures. Additionally, these undesirable sounds goal a few unsettling influences and establish an unevenness in the climate.

► How to Reduce Pollution?

We should focus on going green, planting more trees, and eliminating waste in nature. We need to save agriculture.

We should quit utilizing unnecessary synthetic compounds and so on in horticulture to save our water from being contaminated. The world ought not just to glance at the business.

Alongside it, we want to find some kind of harmony between modern advancement and the introduction of nature. The role of government, mass media, and civil society are necessary.

Pollution is one of the dangerous issues that we all are facing. It would impact the entire world. There is no denying the fact. Instead, the world community should unite to save each other from the threats of pollution.