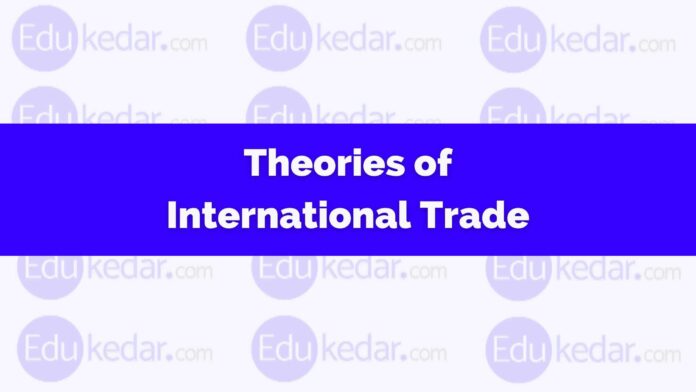 ► What is International Trade?

International trade is concerned with the exchange of goods and services with foreign countries.

International trading provides an opportunity to facilitate the trade of goods and services outside of the home country. It is very helpful there for those countries where domestic trade is not sufficient to fulfill domestic consumer’s demands.

“International trade is defined as the exchange of goods and services across international borders or territories.”

► What are the Theories of International Trade?

International trade theory refers to theories based on an exchange of raw materials and manufactured goods and providing services across national borders.

It was developed in the 16 century, mercantilism was one of the earliest efforts to
develop an economic theory. According to this theory, a country’s wealth was solely determined by the amount of its gold and silver reserves held by the country.

Mercantilists believed that a country should increase its holdings of gold and silver by promoting exports and discouraging imports this means this theory supports protectionism. The objective of each country was to have a trade surplus, which means a situation where the value of exports is greater than the value of imports.

This theory was propounded by the great economist Adam Smith In 1776. The focus of this theory is on the ability of a country to produce a good more efficiently than another nation.

Adam Smith assumed that trade between countries shouldn’t be influenced or restricted by government policy or intervention and that trade should flow naturally according to market forces.

He assumed that in a hypothetical two-country world, if Country A could produce a good cheaper or faster (or both) than Country B, then Country A had the advantage and could focus on specializing in producing that good and enhancing efficiency and vice versa.

So with increased efficiencies, people in both countries would benefit and trade should be encouraged.

His theory opposed the mercantilism concept which stated that a nation’s wealth should be judged by how much gold and silver it has.

This theory was given by David Ricardo, in 1817. This theory answers the problem that arises from the absolute advantage theory was that some countries may be better at producing both goods and, therefore, have an advantage in many areas.

Ricardo said that even if Country A had the absolute advantage in the production of both products, specialization and trade could still occur between the two countries.

Comparative advantage occurs when a country cannot produce a product more efficiently than the other country; however, it can produce that product better and more efficiently than it does other goods. The essence of this theory exists in fact of comparing the opportunity cost of both products.

This theory was given by Eli Heckscher and Bertil Ohlin, in the early 1900s. This theory focused their attention on how a country could gain a comparative advantage by
producing products that utilized domestic factors that were in abundance in the country.

This theory is based on the fact of how much quality and quantity factors of production are available in the country such as land, labor, and capital. These factors determined the cost 0f goods and services produced from these factors

Their theory, also called the factor proportions theory, because he stated that countries would produce and export goods that required resources or factors that were in great supply and, therefore, cheaper production factors, and countries would import those goods that required resources that were in short supply, but in higher demand from other nation.

The factor proportion theory was opposed by the economist Wassily W Leontief.

◉ (b) Modern or firm Based Trade Theories

This theory was given by Steffan Linder in 1961. Linder’s theory proposed that consumers in countries that are in the same or similar stage of development would have similar kinds of needs, tastes, and preferences.

According to Linder companies first, produce for domestic consumption and after fulfilling the domestic demand companies when exploring exporting opportunities, the companies focus on finding markets that are similar to their domestic ones, in terms of customer preferences, disposing of income offer the most potential for success in the international business.

Linder’s country similarity theory mention that most trade in manufactured goods will be between countries with similar per capita income and similar customer preference.

Product Life Cycle Theory was given by Raymond Vernon, in the 1960s.

The theory, originating in the field of marketing which is concerned with the product life cycle has three different stages:

In the first stage, the developed country will innovate a new product and the product have no competitor, which have a small market so they manufactured the product locally, the cost of producing each unit is very high as demand increase for other developed its start exporting of product

In the Second stage, the Maturity stage, New manufacturing plants are open in each developed nation to meet their demand, and decrease the manufacturing cost, the room is still available for modification, and demand for products is still high.

In the third stage, Product standardization, In this manufacturing plant is established in a developing country because of cheap labor, Firms do not focus on further modification, and the product has many competitors.

Global strategic rivalry theory is given by economists Paul Krugman and Kelvin Lancaster in the 1980s. This theory focused on how MNCs and what kind of efforts they make to gain a competitive advantage against other global firms in their industry which threaten their business.

Firms focus on developing competitive advantage that helps them to encounter global competition in their industries and in order to remain to prosper.

The critical ways through which firms can obtain a sustainable competitive advantage include:

This theory was given by Michael Porter, in 1990. Porter’s theory stated that a nation’s competitiveness in an industry depends on the capacity of the industry how much and how fast it innovates and upgrades.

This theory explained why some nations are more competitive in certain industries. To explain his theory, Porter identified four factors.

The four key factors that determine national competitive advantage are