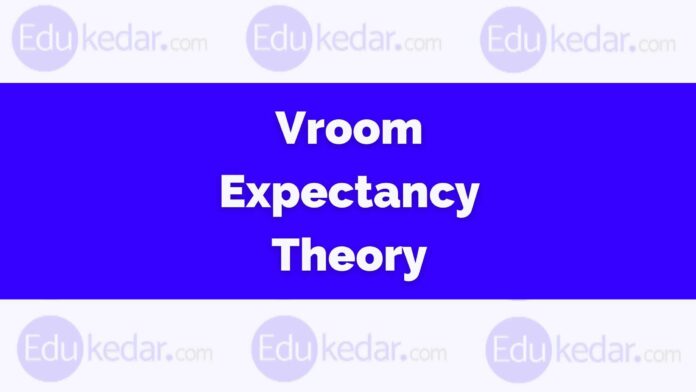 ► What is Vroom Expectancy Theory?

Vroom expectancy theory was given by Victor H Vroom in 1964.

The vroom expectancy theory propounded that the work effort of an individual is directed towards the expected behavior that leads to desired outcomes.

In simple words, we can say that the vroom expectancy tells us the correlation between efforts and performance to get the desired reward.

In this theory, employees are considered rational human beings and before they perform their task or job they think about what they have to do to get a reward and how much the reward means to them.

► Assumptions of the Vroom Exceptency Model

He stated that effort and performance are directly linked to personal motivation and he uses expectancy, instrumentality, and valence as a variable to account for his theory.

Instrumentality means that if an individual performs better then desired outcome will be achieved.

Valence refers to the desire of a person with respect to a potential outcome or reward. The reward may be extrinsic ( pay rise, promotion, and other benefits) and intrinsic (satisfaction and self-esteem)

If any of the variables is low the then motivation level is likely to remain low.

Unlike different theories of motivation which are only limited to satisfying and unsatisfying needs or the nature of work but the vroom expectancy theory implies that employees must analyze the appropriate effort that can result in getting a reward.

This theory guides managers in designing the organizational reward, and goal setting.