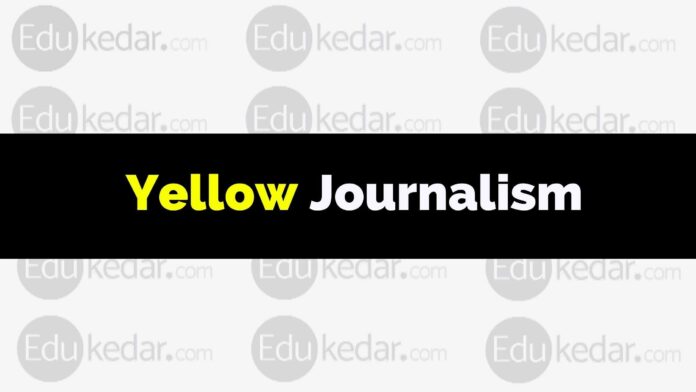 Yellow journalism and the yellow press are any journalism that treats news in an unprofessional, unethical, and sensationalized pattern. The techniques utilized in yellow journalism include exaggeration of news stories, events, and various untrue information.

Today we will be discussing the topic What is yellow journalism? Explain in brief. We will also cover all essential aspects of yellow journalism including its Meaning, Definition, history, Characteristics, Impact & Examples.

What is Yellow Journalism?

Yellow Journalism is a form of reporting that is based on sensational stories, clickbait titles, or headlines that were often exaggerated or false information.

For Example, during the late 19th-century yellow journalism was one of many factors that initiated war between the United States and Spain in Cuba and the Philippines.

According to Frank Luther Mott, Yellow Journalism can be defined based on five characteristics that are as follows; 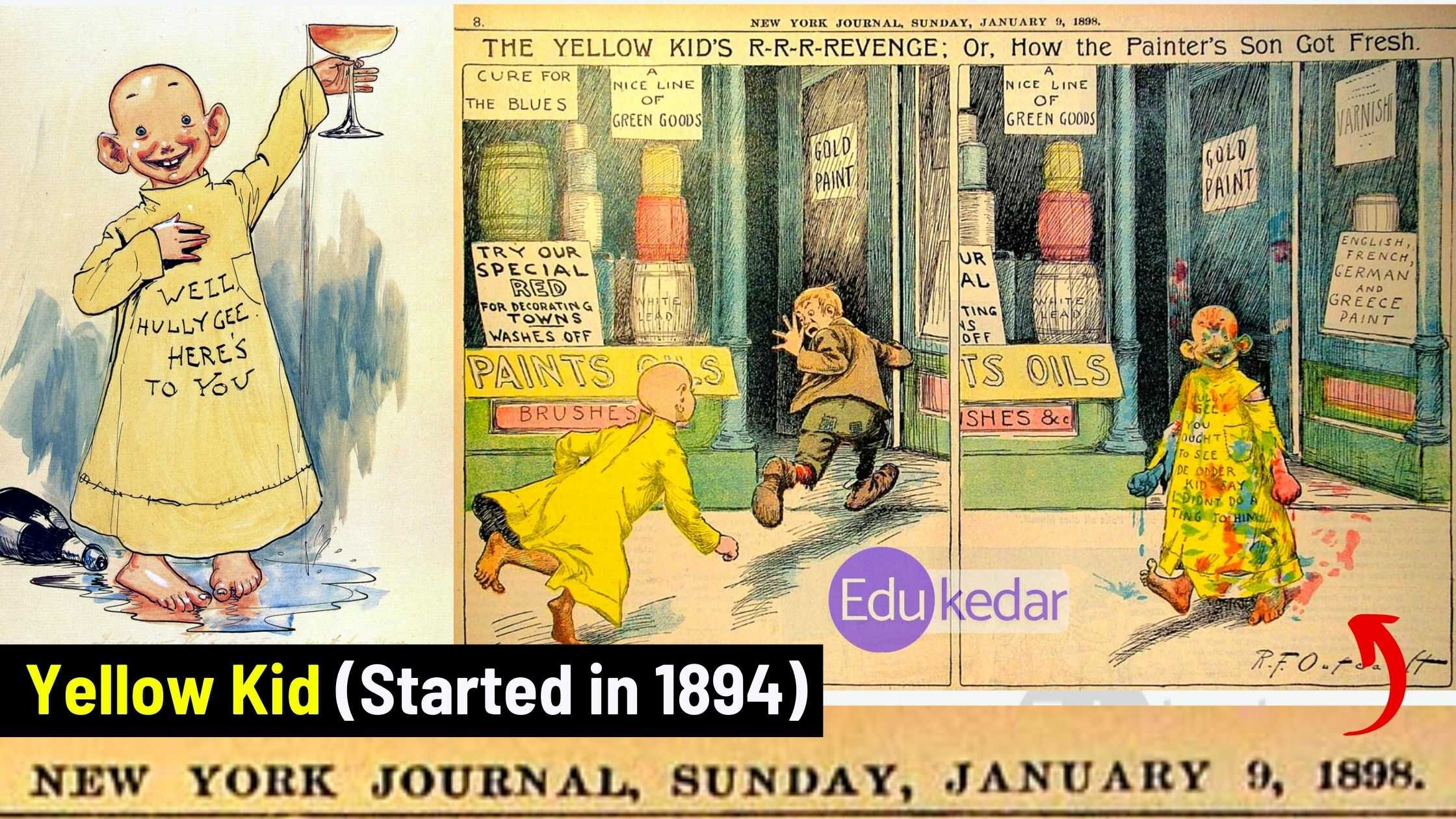 The Yellow Kid Comics in America written by Richard Felton Outcault was based on the life of people living in the slums of New York, which had a character named Yellow Kid.

He was a Union soldier under Lincoln. He worked for a German newspaper in St. Louis and later became the owner of the St. Louis Dispatch Works tirelessly.

He Wanted newspapers to be champions of human rights and speak for those who did not have a voice (weaker section).

Pulitzer aimed to use the paper to “expose all evil, fraud and scam practices, fight all public evils, misdeeds, and abuses, and to battle for the rights of people with earnest sincerity”.

He was the Son of a wealthy politician and Harvard grad. He apprenticed under Joseph Pulitzer at the New York World. His Father gave him the San Francisco Examiner (which
he won in a poker game). At age of 24, Hearst modeled it after the World.

The Competition between both newspapers leads to irresponsible and unethical journalism. Both men sensationalized events to the extreme, and the public becomes inflamed and angry demanding Congress take to action.

WHEN DID YELLOW JOURNALISM END??

Does yellow press simply fade away, and will never return? Or it will remain forever?

The answer could be, that it’s not faded, to some extent, it is also currently used by many newspapers and news channels to engage the audience.

We can also say that it will remain with us forever, as the newspapers and news channels need audiences and yellow journalism is an effective tool to attract an audience.

Some other characteristics of yellow journalism are stated below:

The effects of yellow journalism are the emergence of a very inappropriate culture of sensationalism, social, political, and economic changes in life, as well as distorted mass media.

Yellow Journalism is seen to come into the picture whenever the competition between media arises. In today’s world, as we have advanced and started using modern methods and technologies. Even technology has not been able to change the principles and essence of Yellow Journalism.

Impact of Yellow Journalism on Society

There are many examples of yellow journalism and a few of them are as follows;

The yellow kid is a popular comic strip character printed by both papers (New York Journal and New York World) in the 1890s when this circulation battle was in full swing. thus the term “yellow journalism” originated.

The yellow kid was the first famous cartoon drawn by Richard Outcault for Joseph Pulitzer’s World. It was a little boy dressed in a yellow nightshirt that would comment on happenings in the city. People would buy the World just to read the yellow kid.

Frederick Remington, a painter, and illustrator told Hearst that there is no war to cover in Cuba, and Hearst replied: “You furnish the pictures. I’ll furnish the war.”

There was supposedly a rebellion by the Cuban people against the Spanish that ran the country. To sell the newspapers both Hearst and Pulitzer had their reporters to stretch the truth to increase their readers.

Fake stories were run about women and children being killed and threatened by the Spanish, people starving on the streets, etc.

Yellow journalism helped to push war between Spain and the United States in 1988. The USS Maine, a US battleship, sunk from an explosion.

Joseph Pulitzer and William Randolph Hearst published false articles about a plot to sink the ship, thereby increasing tensions. While not a part of the decision directly, the two men (Pulitzer and Hearst) are blamed by many historians for drawing the United States into the war.

“Fake news” appeared for the first time in America, and leaves readers wondering whether journalists care more about selling copies and earning money or to report the exact truth.

Clickbait is a modern form of yellow journalism that is widely popular all over the internet sites i.e. YouTube, Facebook, Instagram, and all other social media platforms.

Clickbait is a title text or a thumbnail link that is designed to attract viewers and entice users to follow that link and read view, or click on the linked piece of online content, being typically deceptive, sensationalized, or otherwise misleading.

Most of the time thumbnail images are so catchy and deceptive in nature and don’t present in the actual video. it is purely decorative and designed to grab the attention of the users.