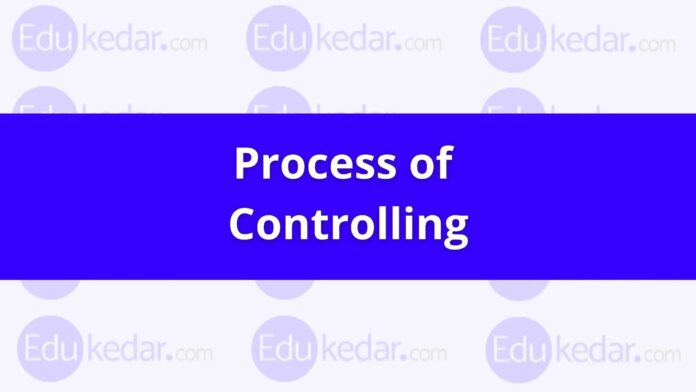 Today in this article we have shared all the steps involved in controlling the process in a detailed manner so anybody can understand easily. So let’s start with brief information about what is planning and its importance in management.

Process of Controlling in Management

The controlling process means guaranteeing that exercises in an organization are proceeded according to the plans.

The controlling function guarantees that an organization’s assets are being utilized efficiently and effectively for the achievement of desired objectives.

“Controlling is the act of monitoring and correcting all activities in an organization to ensure they are being accomplished as planned.”

Must Read :Nature & Objective of Controlling

Controlling is an important function performed by Managers. This will involve many activities given as follows;

Now we will discuss all the steps in the controlling process with examples.

► Steps in Process of Controlling 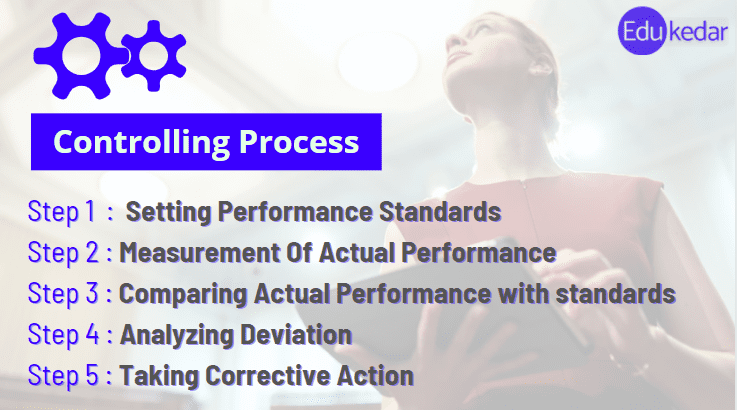 Controlling process steps are the same for all controlling techniques and the sequence of all the steps is as given below.

Setting Performance standards is the first step in the controlling process and these are the plans or the targets which have to be achieved according to the business function.

It makes criteria for judging the performance of the workers. Standards generally are classified into two categories;

a. Measurable or tangible: Those standards which can be measured and well defined are called measurable standards. Examples of Tangible standards are cost, output, expenditure, time, profit, etc.

b. Non-measurable or intangible: There are standards that cannot be measured in monetary terms. For example, the performance of a manager, deviation of workers, their attitudes towards a job. These are known as intangible standards.

Measuring Performance levels can be an easy and difficult task sometimes. Measurement of tangible standards is easy as it can be expressed in units, cost, money terms, etc.

Quantitative measurement becomes difficult when the performance of the manager has to be measured.

Managerial efficiency or Performance of a manager cannot be measured in quantities. It can be measured only by certain attributes-

a. Attitude of the workers,
b. Their morale to work,
c. The development in the attitudes regarding the physical environment, and
d. Their communication with the superiors.

Comparison of actual performance with the set standards and planned targets is very important.

Deviation can be defined as the gap between actual performance and the planned targeted set standard of performance.

The manager has to find out two things that are first, the extent of the deviation and secondly, the cause of deviation.

The extent of deviation means that the manager has to find out whether the deviation is positive or negative or whether the actual performance is in conformity with the standard performance.

The admissible scope of not entirely settled by surveying deviations from the norms.

Control should be centered around key outcome regions (KRAs) that are significant to an association’s prosperity. These KRAs have been assigned as significant places.

(B) Management by Exception:

Exceptional administration Control by an exemption, frequently known as control by special case, is a key administration control reasoning in light of the conviction that endeavoring to control everything prompts overseeing nothing. At the end of the day, you can’t handle everything simultaneously.

The managers have to exercise the controlling technique, Management by exception. He has to find out those deviations which are critical and important for an organization. Here the minor deviations have to be ignored.

Major deviations like replacement of tools & machinery, the appointment of workers, quality of raw material, rate of profits, etc. should be looked upon consciously.

Therefore in the corporate world, it is said, If a manager controls everything, he ends up controlling nothing.

For Example, the organization regulator concludes that remedial activity is required when the costs are more prominent than $10,000 or 20% higher than anticipated. The objective of the management by exception case approach is to just concern the executives with the main deviations from the business’ arranged course or execution.

Another example, if the prices of stationery charges increase by a minor 5 to 10%, it can be called a minor deviation. On the other hand, if monthly production decreases continuously. Then it is called a major deviation. Once the deviation is identified, a manager has to find the various cause which has led to deviation.

Causes/Reason for Deviations can be as follows-

a. Erroneous plans or planning
b. Lack of Co-ordination
c. Defective Implementation of plans
d. Supervision and communication are ineffective, etc.

Once the causes and extent of deviations are identified, the manager has to detect those errors and take corrective actions for them.

There are two things that managers have to keep in mind, i.e,
a. Taking corrective measures for deviations that have occurred; and
b. After taking the corrective actions, if the actual performance is not in conformity with plans, then the manager can reform the set standards.

When the actual performance is aligned with the set standard of the company then the controlling process is completed. But controlling is a continuous process because managers have to take follow up from time to time even if everything is alright.

Follow-up is an important activity because it is the only way by which a manager can take corrective actions when needed, and can exercise controlling function.

Must Read :What is Planning?

Also Read :What is Staffing?