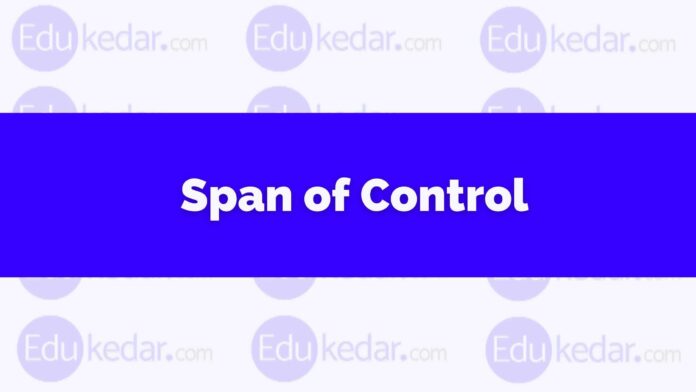 From this article, we will get a detailed explanation of what is the span of control, its types, and the factors affecting the controlling in an organization.

► What is the Span of Control in Management?

In management, a span of control is defined as the degree to which a manager or superior successfully monitors subordinates.

For an organization, it becomes very difficult to find the correct span control because every organization engages in different types of businesses and the number of subordinates managed by a manager varies according to the complexity of the task.

◉ Meaning of Span of Control

The span of control refers to the total number of direct subordinates that a manager can monitor or control while ensuring a high level of effectiveness and efficiency in work. It is very important for determining work efficiency which is very significant for accomplishing organizational goals.

◉ Definition of Span of Control

The span of control is defined as the number of subordinates that can be controlled or handled by the superior without compromising the effectiveness of the job.

In other words, a span of control is defined as the number of staff members reporting to a manager is considered as the control span of that manager.

A span control is also known as a span of management sometimes.

“Span of controlling is the number and range of direct, habitual communication
contacts between the chief executive of an enterprise and his principal fellow officers.” – Dimock

“Controlling span refers to the number of people that a manager can supervise.” – Lois Allen

“Span of controlling refers to the maximum number of subordinates which may be placed under the jurisdiction of one executive immediately superior to them.” – Peterson and Plowman

“A manager may have up to as many immediate sub-ordinates that he can know personally in the sense that he can assess personal effectiveness.” – Elliott Jaques

► Types of Span of Control

There are two types of Control Span.

In the narrow span of control, a manager or superior oversee and controls a few subordinates at a time, and mainly this type of controlling requires where specialized work to be performed.

In the wide span of control, a manager or superior oversee and control a large number of a subordinate at a time. and a wide type of span is needed where the repetitive task is performed.

The controlling span is determined by a large number of factors, let us look at these factors.

► Principle of Span of Controlling

The principle of span in control propounded that the number of subordinates can be effectively manageable by the manager. There is a limit exist that determines how many subordinates a manager or superior can supervise.

In the bulb factory assembly line a line manager can monitor the 100 employees because the task of assembling a bulb component is very repetitive in nature and by doing it many times an employee becomes perfect.

A team is working on developing a mobile app, so the project managers have to manage 3 to 8 subordinates because the nature of the task is complex and a high level of communication is needed to accomplish the task.