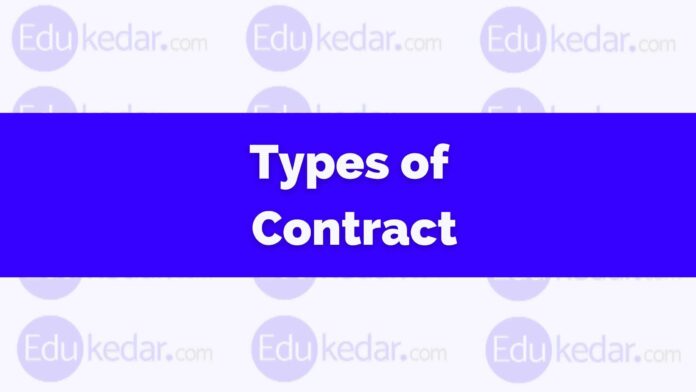 Contracts may be classified into different categories on the basis of enforceability, performance, and formation. Here in this article, we have shared all the different types of contract with examples.

► What is a Contract?

A contract is an agreement enforceable by law and it is between two or more parties. In order for a contract to be considered valid, there must be; an offer and acceptance, consideration, capacity, consent, and lawful purpose.

► 13 Different Types of Contract in India

There are various Types of Contract that can be classified on the basis of their legality, performance, and formation.

According to the Indian Contract Act of 1872, There are different types of contract in India but it is mainly classified on the basis of the following factors-

✔ Types of Contract based on Validity

These types of contract are based on legality and validity.

A void Contract is a contract that does not have 7 essential elements of a valid contract. Void Contracts are known as unlawful agreement, unlawful consideration, lack of capacity, and mutual mistakes.

Section 2 (g) of the Indian Contract Act, defines an agreement not enforceable by law is said to be a void contract. Void Contracts often become void due to the impossibility of performance.

Thus the parties to the contract do not get any legal redress in the case of void agreements.

For Example 1, A, and B contract to marry each other. Before the time is fixed for the marriage, A goes mad. The contract becomes void. A contract also becomes void by reason of subsequent illegality.

Example 2, A in England agrees to supply goods to B in Germany, After the formation of the contract war breaks out between England and Germany. And the supply of goods to Germany I prohibited by legislation. The contract becomes void. A contingent contract to do or not to do anything if an uncertain future event happens becomes void if the event becomes impossible.

A voidable contract is a formal agreement between two or more parties that may be rendered unenforceable for a change in law or circumstances, when a contract is made by mistake, misrepresent undue influence, and fraud then parties of the contract will declare that contract as an invalid contract.

For Example,  If Rahul offers Sohan to sell land. All documents related to the land were taken fraudulently by Rahul. If later on, Sohan realized that Rahul was not the true owner as Mohan claimed that Mohan is the real owner, Sohan can terminate the contract or seek damages.

An unenforceable contract is one that cannot be enforced in a court of law because of some technical defect such as the absence of writing or where the remedy has been barred by lapse of time.

A contract is illegal if it involves doing something that is a criminal act or civil wrong or against the public good. It is void and avoids connected contracts also. Money paid under illegal contracts can’t be recovered.

A contract that is otherwise legal might also become illegal if it’s the subject matter is to be used for an unlawful purpose.

For Example, Selling a firearm to one who doesn’t have a license to hold one knowing that he will use it to kill someone, the contract will become illegal.

✔ Types of Contracts based on Creation/Formation

These types of contract are based on how contracts are formed.

If the terms of a contract are expressly agreed upon (whether by words spoken or written) at the time of formation of the contract, the contract is said to be an express contract.

An express Contract is a contract in which the proposal and acceptance, that results in an agreement, enforceable by law, are stated verbally, either orally or in writing.

There is some expression or conversation between two or more parties. The contract is created by words either in written form or orally.

Example 2:  A contract with B to purchase a house, hence they sign the contract and various formalities were fulfilled i.e. registration, stamp duty, etc.

An implied contract is one that is inferred from the acts or conduct of the parties or the course of dealings between them.

It is not the result of any express promise or promises by the parties but their particular acts. An implied promise results in an implied contract.

Implied Contracts are formed by an agreement that is not stated in words formally because it is inferred from the situations, facts, and conduct of the parties. Verbal contracts are also satisfactory and Intentions are not clear but assumed.

Example 1: visits to a hospital, and visit salon for haircuts are implied contracts.

Example 2: If a coolie in uniform picks up the luggage of A to be carried out of the railway station without being asked by A and A allows him to do so. It is an implied contract and A must pay for the services of the coolie detailed by him.

It resembles a contract in that, a legal obligation is imposed on a party who is required to perform it. It rests on the ground of equity that, a person shall not be allowed to enrich himself unjustly at the expense of another.

Quasi-contracts are the lawful and purely voluntary acts of a man, from which there results in any obligation whatever to a third person, and sometimes a reciprocal obligation between the parties.

For Example. A leaves his wristwatch at B’s house by mistake. Here B has a quasi-contractual obligation to return it to A.

An E-commerce contract is one that is centered between two parties via the internet. On the internet, different individuals or companies create networks that are linked to numerous other networks. This expands the area of operation in commercial transactions for any person.

An agreement between two or more parties is legally valid if it satisfies the requirements of the law regarding its formation. i.e. that the parties intended to create a contract primarily. The same is true in the case of E-contracts.

Example: Digitally signed agreements, An Electronic Contract is a contract that is entered into in cyberspace and is evidenced only by electronic impulses (such as those that make up a computer’s memory), rather than for example a typewritten form.

✔ Types of Contracts based on Execution

These types of contract are based on the performance of the parties that are involved in a contract.

Executed means that which is done. An executed contract is one in which both parties have performed their respective obligations.

A contract is said to be executed when both parties have completely performed their obligations. It means that nothing remains to be done by either party under the contract.

For Example, A buys a book from B. A delivers the book and B pays the price. It is an executed contract.

Executory means that which remains to be carried into effect. An executory contract is one in which both parties have yet to perform their obligation. Partially Executed or Partially Executory

In an Executory contract, something remains to be done. In other words, conduct is said to be executory and has yet to perform its obligations.

For Example, If A agrees to take the tuition of B, from the next month and B in consideration promises to pay A Rs 1000 per month, the contract is executory because it is yet to be carried out.

✔ Types of Contract basis on Liability

A bilateral contract is one in which the obligations on the part of both parties to the contract are outstanding at the time of the formation of the contract. (Executory consideration)

A Bilateral contract is where both parties have something to offer as consideration.

Example 1: The Sale of Property between two parties.

Example 2: Mrs. Sharma agrees to watch her neighbor’s kids, on Monday and Tuesday and Mrs. Singh agrees to watch Mrs. Sharma’s kids on Wednesday and Thursday. In this case, a bilateral contract has been entered into by the two moms when both parties have made counter-promises to each other. The reward is getting quiet afternoons 2 days a week.

A unilateral or one-sided contract is one in which only one party has to fulfill his obligation at the time of the formation of the contract. (Executed consideration)

Whereas a Unilateral Contract binds only the party promising something of value.

Example of Unilateral Contract: If Mrs. Sharma pays Rs. 500 per day to Mrs. Singh for watching her kids on Monday and Tuesday, then, in this case, the contract becomes Unilateral where only Mrs. Singh receives consideration for the action of taking care of Mrs. Sharma’s kids. Further, Mrs. Sharma is only obligated to pay the money if Mrs. Singh watches her kids.