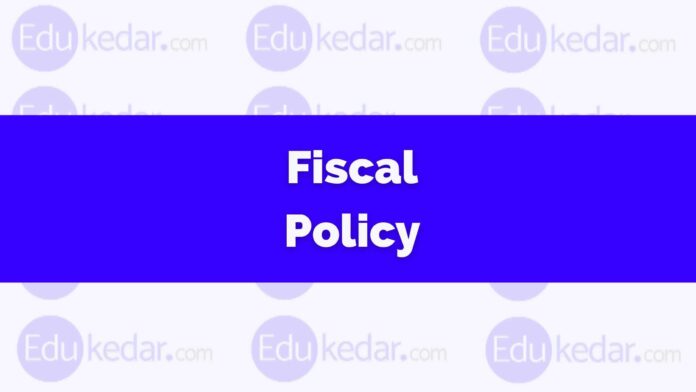 Fiscal policy is a crucial part of modern economies and it is operated by the government through budget and policies. The government uses fiscal and monetary policies to achieve stability and growth by influencing and regulating the behavior of spenders, consumers, and investors.

In this article, we will learn what is fiscal policy, its types, its objectives, how it affects the national economy, what is budget, and what are the tools and instruments of fiscal planning.

Fiscal policy is a part of government policy that is concerned with raising revenue through taxation and other means and deciding the level of expenditure.

It is a tool that helps the government decide how much money it should spend in different economic sectors to support economic growth, and how much taxes it should levy to earn revenue so it keeps the economy of the country on track.

Fiscal policy is defined as the use of government spending and taxation policy to influence the aggregate demand and supply of goods and services, promote economic growth, and generate employment.

There are three types of Fiscal policies

Expansionary policy occurs when government spending is lower than tax revenue and is usually undertaken to pay down government debt.

It is usually undertaken when an economy is in equilibrium. Government sending is fully funded by tax revenue and overall the budget outcome has a neutral effect on the level of economic activity.

In India, fiscal policy operates through the budget. The budget is an estimate of government revenue and expenditure for an ensuing financial year.

The budget is presented in parliament by the finance minister. Article 112 of the Indian constitution deals with the budget.

Also Read : What is Budget? (in detail)

One of the primary objectives of fiscal policy is to generate sufficient revenue to meet government expenditures. To protect from fiscal deficit government use a progressive taxation policy.

Inflation is a very big problem in developing countries, in which the price of commodities rises extremely high, so the government uses its fiscal tools like control over commodities, granting concessions and subsidies with the objective to achieve price stability and economic growth.

The fiscal policy promotes economic activity, it provides protection against internal and external economic shocks. It also strengthens the microeconomic and macroeconomic framework.

The government uses effective tariff policy and EXIM policy as tools to provide long-term economic stability and balanced growth of various sectors of the economy.

The aim of the fiscal plan is to accelerate economic growth so it encourages investment in both the private sector and the public sector which are considered vital importance from the social economic viewpoint of society.

One of the main goals of fiscal policies is to create full employment in the economy. The government provides special grants, and tax cuts to accelerate economic growth.

Accumulation of wealth among a few people hand not only creates income equality but also creates social and political inequality which may be caused a threat to economic instability.

Capital Expenditure (Capex) funds are used by a company to acquire, upgrade and maintain physical assets such as property, plants, buildings, technology, or equipment.

Revenue Expenditure is a routine expenditure incurred in the normal course of business and includes the cost of sales and maintenance of fixed assets.

Transfer of Payment Transfer payments are payments from tax revenue that are received by certain members of the community.

Payments tend to transfer income from those able to work and pay taxes to those unable to work or in need of assistance.

The person on whom the tax is levied is identifiable. The burden of paying the tax falls on the same person or entity and cannot be shifted. Eg: Income tax, Corporate tax, Wealth tax, etc.

The person on whom the tax is levied is not identifiable. The burden can be shifted. E.g.: GST, Excise duty, customs duty, Service tax, etc.