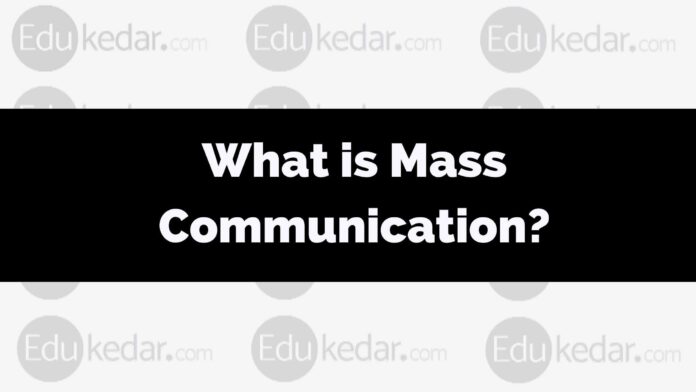 Here in this article, we will discuss What is Mass Communication? Meaning, Definition, Functions, types, and examples. Along with this, we will cater to all essential topics including its history, scope, features, and characteristics.

► What is Mass Communication?

Mass communication is one of the significant forms of communication in today’s era. It is a process of disseminating messages to a large number of audiences using various tools like television, newspapers, radio, and digital media.

It is the easiest and very quick method of transferring information to a large number of people around the globe.

Mass communication simply means the process of creating, sending, receiving, and giving feedback to a mass audience through the newspaper, radio, television, and digital media.

It is mainly concerned with how the information disseminated persuades or lays impacts the behavior, attitude, feeling, thinking opinion, or emotion of the people receiving that information.

There are several definitions of authors who defined it in their way, some of the definitions are listed below:

“the process where media organizations produce and transmit messages to large public and the process by which those messages are sought, used, understood, and influenced by the audience”.

The concept of Mass communication revolves around certain elements that are listed below;

Mass Communication primarily developed in just the last 500 years. Its history is stretched around the emergence of books, newspapers, radio, television, and the internet.

Let’s take a look at the history of Mass Communication in more detail;

Must Read :What is Yellow Journalism?

Mass communication has several important characteristics some of which are listed below:

Let us now discuss these functions in more detail;

There are five types of mass communication media used to disseminate information around the globe:

Let us now discuss these in brief:

Print media is the oldest and first means of mass media used for the dissemination of information to a large audience. It includes newspapers, magazines, books, journals, weekly newspapers, comics, quarter newspapers, etc.

People enjoy reading newspapers and magazines, their day starts with a cup of tea and a newspaper or magazine. Print media along with a source of news stories and other information, it is a great source of entertainment as well. Newspapers have game corners possessing games like sudoku, riddles, and puzzles.

Newspapers, magazines, journals, etc are now published digitally, readers can now easily access them from their mobile phones, computers, and other devices. Novels and comics are great combinations of learning with entertainment. Thus, in today’s era digital media and other media are used more but print media has its own essence and importance.

The emergence of broadcast media brought a boom in the world. The invention of the radio and television changed the world of mass communication. It includes radio, television, recorded music, and movies.

Music records were developed in the 1870s and are considered to be the first non-print source of mass communication.

Recording took a pace again in the 1950s when LP( long play) vinyl record was invented, then came eight track-tapes, which were followed by the invention of vinyl and cassettes in 1965.  Compact discs are considered to be the greatest invention in recording arts.

Radio is one of the oldest forms of mass communication which has successfully maintained its essence. However, now most of the things are digital radios are also available online, which has made them accessible without carrying a radio with you. Online radios listen more than those who work on certain frequencies.

Film and television are the most used sources of entertainment and information for around 90% of people around the globe. It is one of the most vital types of communication which has both audio-visual aspects which makes it more engaging. Along with this TV and films contribute a lot in terms of generating employment and increasing the economy.

Outdoor Media advertising is specifically used by organizations and several brands to target customers in a particular geographic area.  It includes billboards, pamphlets, ads in restaurants, etc. There are also several other ways of outdoor advertising which include mobile, digital, lamp posts, advertising on street walls, etc.

Transit media is widely used for the purpose of advertising. It is also considered one of the effective methods of advertising. It includes posters, banners, notices, etc which are placed on means of transportation such as busses, autos, trains, and many others.

Through this, a large number of audience reads and see this advertisement. Transit media is generally used for advertising products, ideas, and services and spreading social information/ issues and awareness to common people.

Digital media has totally changed the scenario of mass communication. It is now the new and most used mode of transmission of information to a large group of people at one time.  It is considered the most powerful tool of mass media.

It is also called new media, it has all the essential components which make digital media one of the best and easiest ways of disseminating information. It includes varieties of things like emails, blogs, videos podcasts, websites, and many others. Digital media also has one of the most used and powerful tools social media. Social media is a great platform for the dissemination of information to a wide audience.

There are many significant examples or sources of mass communication some prominent examples are listed below:

Let us now discuss these examples in more detail.

Mass media plays a very important role in journalism. News is produced and disseminated with the help of tools of mass communication such as TV, radio, etc.

Nowadays social media is the most used platform for many purposes. It connects people from different parts of the world and lets us learn new things. Some of the social media platforms are YouTube, Twitter, LinkedIn, Facebook, Instagram, etc.

Books either in hard copy or e-books are mass media. A large number of people read them and gain knowledge. It has a great reach and it is capable of providing in-depth knowledge about many topics.