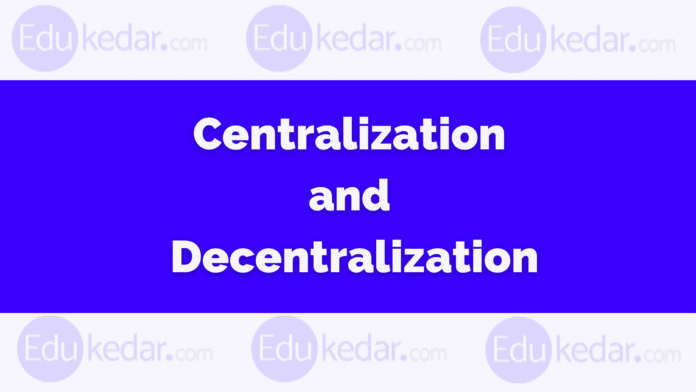 Centralization and Decentralization are the two different ways of an organizational system used in various sectors such as government offices, corporate, private sectors, firms, and multi-national companies.

In order to find out which is more effective and reasonable, it is important to understand the differences between the Centralization and Decentralization system and their advantages and disadvantages.

► What is Centralization? (Meaning & Definition)

Centralization refers to the concentration of power or authority in a few hands only.

In other words, Centralization structure can be defined as maximizing the power access to specialized personnel.

Centralization is just like or the same as a dictatorship (that one person will make all the decisions and put pressure on the other employees).

► What is Decentralization? (Meaning & Definition)

Decentralized refers to the degree to which decision-making is spread throughout the organization, It simply means everyone has the right to speak.

In Other words, Decentralization can be defined as promoting genuine cooperation and participative management among employees rather than independence maximizing individual institution initiatives.

This is like leadership in that the leader will decide with every level what is good for the organization. An organization is decentralized when the decision-making authority or power is in all the hands whether top-level, middle level, or lower level.

Example: There is an organization in which there is one boss but he will not decide everything of the employee he will decide the things according to the needs of the employees.

So this organization is decentralized.

And on the other hand, if an organization will be fully decentralized then the work will not be complete on time they will over-utilize their power.

1. Provide Power- In this, it provides all the power to the top-level management because they are well experienced with all the things than the other levels.

1. Less Motivated- In this, the top level will be less motivated because all the decisions will be made by them so another level will not support and they will not work so hard for that thing which could cause loss of organization.

2. Neglected functions for Middle level- Many times the middle-level people will neglect the work given by the top-level management because they are not involved in any type of decision so they will not take that work seriously.

1. Quicker Decision- In this, all the levels are included so it will be easy to make decisions getting ideas because every person has a different idea so they will provide new ideas to make the organization’s goal better which will help in achieving the goals on time.

2. Motivation of local managers- All the managers will be motivated because they are included in all the decisions which are made by the organization so they will feel participate in all the activities which will motivate them.

3. Reduces workload- It reduces the workload of every people cause everyone has authority and every level will do the work. and the workload will not be on one person only. Even there will be a leadership instead of dictatorship. No one will force anyone to work.

1. Loss of control- In decentralization, the authority or power has been divided into all the levels so there the top-level management will lose control over all the people because everyone will do work according to them.

2. Duplication of services- In this, there are more chances of duplication because everyone will have the authority so many times it happens that maybe one person has already done or completed that work and the other one is doing the same.