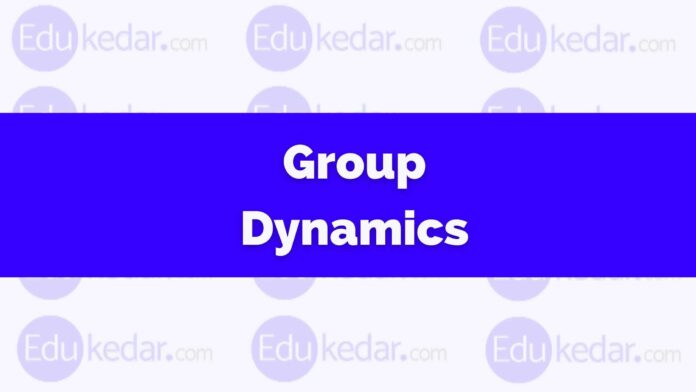 Group dynamics is the study of groups and is also a general term for group processes. Today in this article we have shared about Group Dynamics and its importance in an organization.

After reading this article, you will definitely learn about

► What is Group Dynamics?

Group dynamics is concerned with the formation and structure of groups and the way they affect individual members, other groups, and the organization.

Group dynamics is the study of the force of interaction between group members. It involves the analysis of factors that are responsible for the creation and functioning of the group.

Therefore group dynamics in basic language refers to the study of forces operating within a group.

The group development has the following five stages –

This is the first stage of group forming. In this stage, members get to know each other and have excitement, nervousness, and anxiety.

This is the second stage of a group called storming. In this stage, members engage in conflict and power struggles.

This is the third stage of the group called norms. In this stage member show cooperation, unity and integration.

This is the fourth stage of group performance. This stage is characterized by overall synergy, focus on the goal,  high productivity, and efficient performance.

This is the last stage of group adjourning. In this stage, groups adjourn only upon the completion of the task or the achievement of the goal.

Also Read : What are Smart Goals?

Command groups are formed by organizations which proper structure, rules, and norms and often consist of a supervisor and the subordinates that report to that supervisor.

Task groups are also commonly referred to as task forces. They consist of people who work together to achieve a common task. Members are brought together to accomplish goals within a specified time period.

Members of interest groups may not be part of the same organizational department but they are bound together by some other common interest.

Friendship groups are formed by members who have similar attributes. and they love to enjoy each other’s company. Group members have similar social activities, political beliefs, religious values, or other common bonds.

As per the principle of belongingness essential for the group members to have a strong sense of togetherness.

This principle of perception is very useful for an organization, it helps in creating a common understanding among the group member regarding any changes adopted by the organization.

The principle of conformity states that confirmation or approval from all the group members group is a general group norm.

It ensures coordination, a common direction, and the successful completion of the objectives.

The principle of change is one of the basic but foremost important principles of group dynamics. This principle means that every decision in a group is bound to change at a specific point in time. Change in a group is inevitable and proper change can which is achieved through proper communication and coordination among the group members.

Every group is created with the aim to achieve the goal with the help of their common motive. The primary principle of the group is that they are goal-oriented and focus all their activities toward the successful completion of the task.

The principle of power implies that group members should have status or power within the group so that they influence each other.