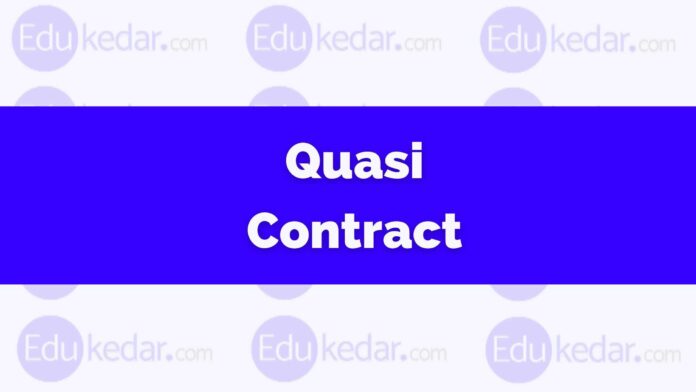 A quasi-contract is “a legal substitute for a contract”. Quasi-contracts are used when a court wishes to create an obligation upon a non-contracting party to avoid injustice. Today in this article we have shared about Quasi Contract with example.

► What is a Quasi Contract?

Quasi-contract is not a contract at all, because the essential elements of a valid contract are absent. It is an obligation imposed by the court upon a person for the benefit of another even in the absence of a contract.

Quasi-contracts are the lawful and purely voluntary acts of a man, from which there results in any obligation whatever to a third person, and sometimes a reciprocal obligation between the parties.”

An obligation created by law, regardless of agreement.

Sections 68 to 72 deal with “certain relations resembling those created by contract” under the Indian Contract Act, of 1872.

Courts create quasi-contracts to protect against the unjust enrichment of the parties in dispute over the payment of goods or services.

“A Quasi Contract is a contract that is created by a court order, not by an agreement made by the parties to the contract.”

“Quasi-Contracts are created by the court when no official agreement exists between the parties, in disputes over payments for goods or services.”

Here are the best examples of Quasi Contracts that will clear your understanding of the concept.

Let’s take the most basic example first. Let’s say you pay for a pizza to be delivered.

If that pizza is delivered to another house, and someone else enjoys your three-topping special, a Quasi-Contract could be initiated.

Now, the pizzeria could be court-ordered to reimburse you for the amount you paid for that pie.

T is a tradesman, who leaves goods at C’s house by mistake, C treats the goods as his own, and C is bound to pay for goods.

Sunny pays for a smartphone to be delivered, Unfortunately for her, that smartphone has been delivered to another house, and someone else received it on her dime.

A quasi-contract has been entered into and the Delivery person (e-commerce site) could be court-ordered to reimburse Sunny for the amount that she paid for it.

A plumber accidentally installs a sprinkler system on the lawn of the wrong house.

Will the men be held liable for payment?