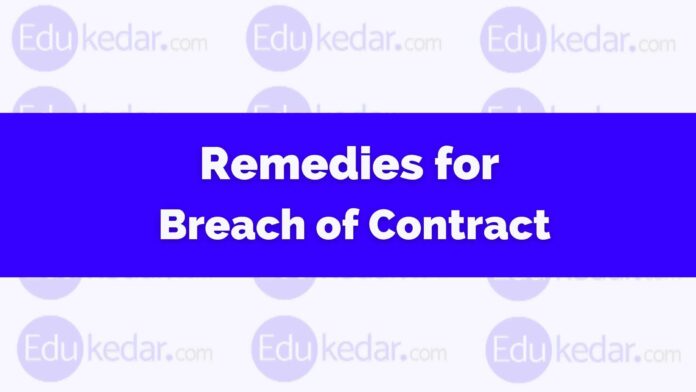 Breach of Contract is the act of violation of any of the agreed-upon terms and conditions of a binding contract. And Where there is a right, there is a remedy so here in this article, we have shared all the various kinds of remedies for breach of contract.

► What is a Breach of Contract?

A contract provides correlative rights and obligations. A right accruing to a party under a contract would be of no value if there were no provision of remedy to enforce that right in a law court in the event of its infringement or breach of contract.

A remedy for the breach of contract means a special right given by law for the enforcement of a right. Remedies for Breach of Contract refers

A contract is a legally enforceable promise. This promise is usually for the purchase of an item, for any consideration or for a service or job rendered. If a party breaks a promise, the other party may be able to sue for the breach of contract.

◉ Definition of Breach of Contract

Breach of contract refers to nonperformance of contract impliedly or expressly at the time of performance or even before that. which is one of the modes of termination of the contract.

If a contract is broken by one party then the other party becomes aggrieved and can take remedy for the breach of the contract.

Breach of contract can be classified into two types.

Now let’s discuss the remedies for breach of contract.

► What are the Remedies for Breach of Contract?

When a contract is broken (breach), the injured party can have one or more of the following remedies;

Here are a detailed description of remedies for the Breach of Contract.

✔ 1. Rescission of the Contract

An injured party may sue to treat the contract as rescinded. He is also absolved of all his obligations under the contract.

In contract law, the term rescission refers to the unfulfilling, undoing, or not making the performance of a contract between parties.

The breach of contract tends to make discharge the contract, but the aggrieved party may sometimes need to approach the court to grant him remedies such as a formal rescission, i.e. cancellation, of the contract.

This action enables the injured party to be free from his own obligations under the contract. The major reasons for rescission can be stated as follows;

An Injured party can rescind a contract because of a breach by another party, but it is necessary that the breach must be so substantial that it defeats the purpose of the contract.

One can also rescind a contract by making all parties agree to cancel the contract if they can do so.

For Example, John promises Mike to deliver 50 bags of cement on a certain day. John agrees to pay the amount on receipt of the goods. John failed to deliver the cement on the appointed day. Mike is discharged from his liability to pay the price.

Here Damages referred to monetary compensation awarded to the injured party by the court for the loss or injury suffered by him.

A remedy taken by getting a suit for damages is the most common remedy available to the injured party. In this way, the injured party entitles to recover compensation for the loss suffered by it due to the breach of contract, from the party who causes the breach.

The damages which may be awarded to the injured party can be different as per the case and they can be of the following types;

Ordinary damages: it is the most common type of damage that arise in the usual course of things from the breach of a contract.

Special damages: supposed to have been in the contemplation of both the parties at the time when they made the contract as the probable result of the breach of it.

Vindictive or exemplary damages: damage + punishment claim (husband-wife matter) in case of the breach of a contract to marry or dishonor of a cheque by a banker wrongfully.

Nominal Damages: where the injured party has not suffered any loss by reason of breach of contract, the court may award a very nominal sum as damage.

Liquidated damages and penalty: represent a sum, fixed and ascertained by the parties in the contract, which is a fair and genuine pre-estimate of the probable loss that might ensue as a result of the breach.

A right to sue on a quantum meruit (as much as earned) arises when a contract, partly performed by one party, has become discharged by the breach of the contract by the other party.

The remedy for a breach of contract available to an injured party against the guilty party is to file a suit upon quantum meruit.

The phrase quantum meruit means “as much as is earned” or “in proportion to the work done.” it is mostly used in the case of salaried employees or wages of the laborer.

A right to use suit upon quantum meruit usually arises where after part performance of the contract by one party and there is a breach of contract or the contract is discovered void or becomes void.

For Example, In an Indian case, Ram Krishna vs Rangoobed, where A plowed the field of B with a tractor to the satisfaction of B in B’s presence. It was held that A was entitled to payment as the work was not intended to be gratuitous and the other party has enjoyed the benefits the benefit of the same.

✔ 4. Suit for Specific Performance of the Contract

In certain cases, the court may direct the party in breach of a contract to actually carry out the promise, exactly according to the terms of the contract.

For Example, cases of breach of contract where Priceless things and ancestor land is involved in the contract.

Specific performance is an equitable remedy that is provided by the court to enforce the duty of doing what the plaintiff agreed by contract to do, against a defendant. This remedy is granted by way of exception and depends on the case.

Thus, this remedy is in contrast with the remedy by way of damages for breach of contract, which gives rise to pecuniary compensation for failure to carry out the terms of the contract.

Both the remedies (Damages, and specific performance of the contract) are available upon breach of obligations by a party to the contract.

This equitable remedy is granted at the discretion of the respective court. So specific performance is a decree granted by the court to compel a party to perform his obligations as per the contract.

This remedy is usually available where damages are not an adequate relief, e.g, where the subject matter of the contract is unique in nature like Chinese vases in the case mentioned in the following example.

For example, A lady sold a pair of Chinese vases to an antique dealer for Rs.1600 each. Before delivery, she began to have doubts about the real value of the vases she asked another dealer for a valuation. He offered Rs.16000 for the vases.

The lady accepted the offer and the second dealer was ordered to hand the Chinese vases over to him. It was held that the claimant was only entitled to get damages.

In fact, despite the damages are not sufficient to remedy here, the claimant was not entitled to specific performance because he had not behaved fairly, as he knew that the price of Rs.1600 for each vase was grossly inadequate. In this case, The lady was not an expert, so the two parties were not on equal footing.

An injunction is an order of a court restraining a person from doing a particular act. It is a mode of securing the specific performance of the negative terms of the contract by the court.

The remedy of injunction is known as preventive relief. It is particularly appropriate in case of anticipatory breach of contract where damages would not be adequate relief.

For Example, If a Doctor practiced anything unethical with a patient then the patient can sue the doctor in court and demand suspension of the doctor’s license by the court as a remedy.

Suit for lifelong ban practice that causes damage to you. It is a mode of securing the specific performance of the negative terms of a contract.

In Another example, a Music label company can sue a contractual singer if he sings for another label. Because according to the contract with the label company they are signed to work only for the label they have contracted.