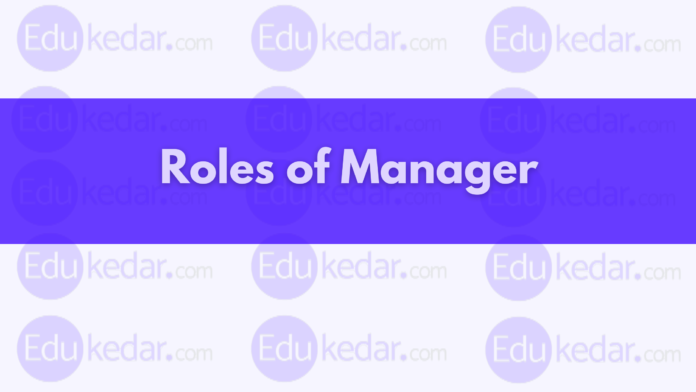 Roles of Manager refers to the responsibilities of managerial position, Mintzberg has defined the roles of managers to identify what managers do in the organization. The role is defined as the behavior which is defined for different positions.

Managerial roles are well defined by Mintzberg in his book “The Nature of Managerial Work”. This book dedicated to roles and characteristics of managerial work, based on his doctoral thesis (study of five managers).

Henry Mintzberg is a management author and Professor at McGill University, Canada. He has written more than 30 books and publications on Business and Management.

Mintzberg introduced some basics concepts of management that are known as the Management Theory by Henry Mintzberg.

According to Mintzberg, the Roles of a manager refers to the expected behavior of the occupant of a position – not all their behavior, but to what he does as the occupant of that position.

These roles of manager applicable to all type of managers whether he is product manager, case manager, account manager, finance manager, nurse manager, general manager, sales and marketing manager.

Managerial roles depend on the formal authority which is delegated to the manager in an organization. The degree of authority determines his position and different roles.

Mintzberg has pointed out that there are three broad categories of roles that a manager performs in each category of roles. These three categories consist total of 10 different roles of a manager. 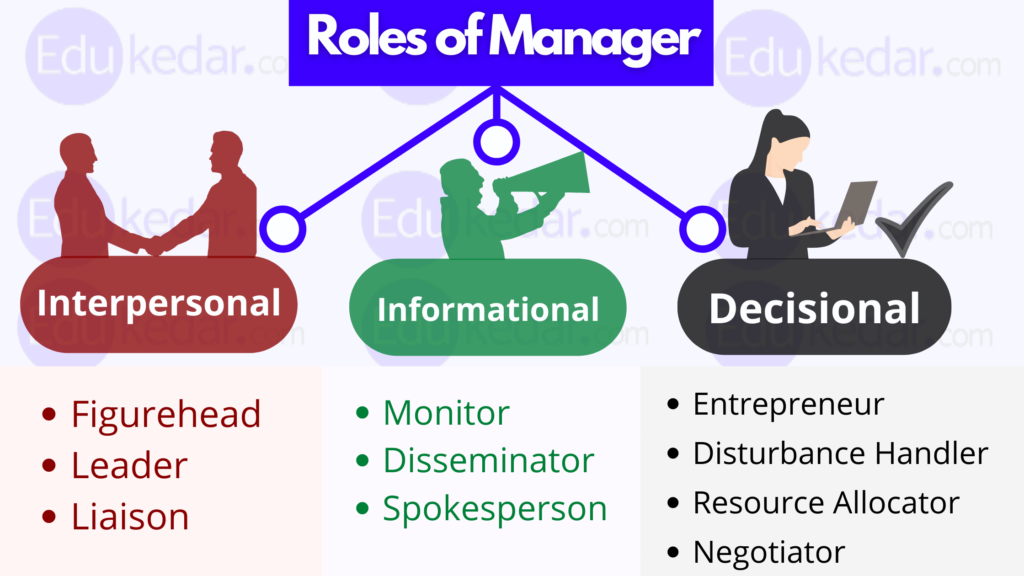 The manager uses his managerial skills and other characteristics while performing a particular role.

The three main categories of roles of a manager are interpersonal, informational, and decisional.

10 Roles of Manager are as follows;

Must Read ➜ 14 Principles of Management

Let’s discuss all these roles and responsibilities of managers according to their categories one by one.

The interpersonal role is all about interacting with people inside and outside the organization.

There are three types of interpersonal roles of a manager in an organization;

A manager plays a figurehead role when he performs activities such as attending ceremonial functions which have symbolic nature.

The leader role of a manager involves leading and motivating his subordinates for willing contribution. Managers perform leader roles when they perform activities such as Hiring, Training, motivating, and guiding subordinates.

In the Liaison role, the manager act as a mediator between the organization and the outsider.

He serves as a connecting link between his units and organizational units, and sometimes with people from the external environment.

Managers perform liaison roles while interacting with other managers outside the organization to obtain favors and information.

The informational role of a manager is like serving as a focal point for the exchange of information. It includes communication, giving, and receiving information, both within and outside the organization. Information is required at every level in an organization to make decisions effective.

There are three types of informational roles of a manager in an organization.

The manager seeks and receives information about those factors which affect his activities. These factors may be within the organization as well as outside it.

By playing a monitor role, Managers gain an understanding of the Organization and its environment.

In the disseminator role, the manager transmits information to subordinates, peers, and superiors within the Organization.

The manager has to act as a disseminator and distributes the information to his subordinates because they may not be in a position to collect it.

In the spokesperson role, the manager represents his organization or unit while interacting with outsiders.

More precisely, the Spokesperson Speaks on behalf of the Organization and transmits information on Organization plans, policies, and actions to outsiders.

Decisional roles of a manager involve choosing the most appropriate and best alternative out of the available ones so that the organization achieves its objectives when the chosen alternative is put into action.

In his decisional roles, the Manager performs four different roles as follows;

Manager as an Entrepreneur role, take initiative and make changes or improvements in the activities of the Organization.

The manager assumes certain risk which is involved in terms of the outcomes of action because these are affected by a variety of external factors.

External factors are dynamic and change constantly. And manager is required to bring suitable changes in the organizational processes to align these with the requirement of the environment.

As a role of disturbance handler, the manager has in charge and takes corrective action when Organization faces unexpected crises.

The manager is required to tackle those forces and events which tend to disturb the organizational equilibrium and normal functioning.

These forces and events may be strikes by Employees and the Trade/Labor Union, shortage of raw material, employee complaints and grievances, etc.

A manager as the resource allocator role must divide work and delegate authority among his subordinates. He must decide who will get what work.

The manager allocates resources such as human, physical and financial among his subordinates.

the manager represents the organization in bargaining and negotiations with outsiders as well as insiders.

Mintzberg’s role approach is based on the close observation of the activities performed by five chief executives. Therefore, the question arises of its validity so far as managerial activities are concerned.

Though some research studies have supported the views of Mintzberg, this approach suffers from two illustrations.

First, the type of roles that have been identified by Mintzberg is not applicable to all types of managers particularly those at the lower levels.

Second, there are many other managerial roles that have not been included in this list, for example, manager as a controller, as a coordinator, nevertheless, Mintzberg has given a new insight into what managers do. 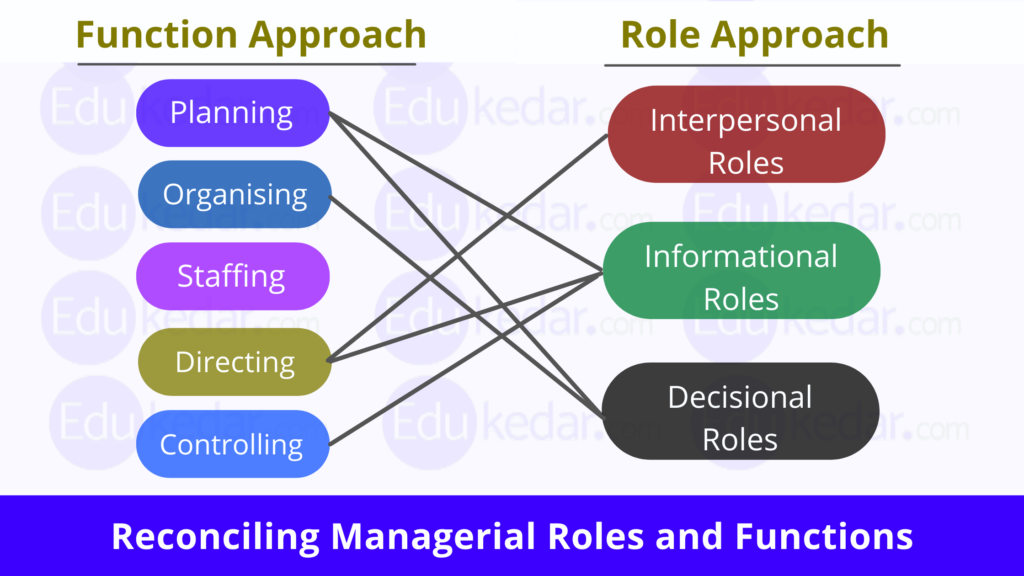 Management functions and roles do not exist opposite to each other but there are two ways of interpreting what managers do. Most of the managerial roles prescribed by Mintzberg can be integrated with the earlier classification of management functions.

In planning, a manager performs informational and decisional roles as he collects various relevant information on the basis of which he makes decisions.

In Organising, he performs decisional roles by allocating resources to organizational units and makes way for coordinating these units.

In Directing, the manager performs interpersonal and informational roles by interacting with his subordinates, leading motivating, and communicating with them.

In Controlling, he shares informational roles.

The Staffing function has not been included in the role approach though managers at every level perform this function.

Thus, the functional approach of managerial jobs is more comprehensive as compared to Mintzberg’s role approach. 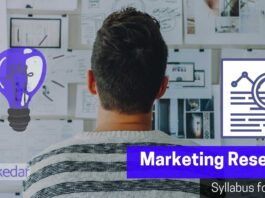 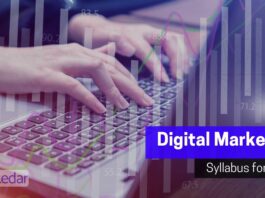 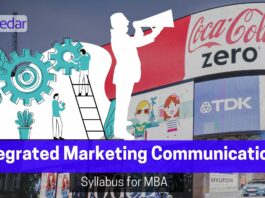 ABOUT US
EduKedar.com is an ed-tech platform that makes online education easier. A one-stop portal for Career guidance, Study material, Academic articles, and Freelance Jobs.
Contact us: [email protected]
© EduKedar.com