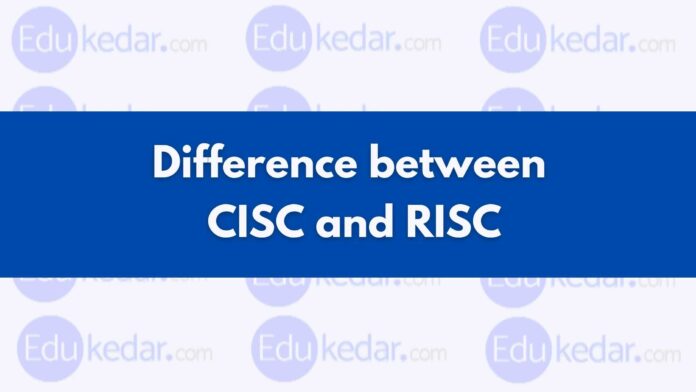 ⦿ Difference between CISC and RISC

First of all, we will give you a basic idea about what is CISC and RISC then we will compare both and make points on the difference between CISC and RISC.

► What is CISC? (RISC and CISC Difference)

The full form of CISC is Complex Instruction Set Computer. CISC is a computer in which single instructions can execute several low-level operations (such as a load from memory, an arithmetic operation, and a memory store) or are capable of multiple operations or addressing modes within a single instruction.

► What is RISC? (RISC and CISC Difference)

The full form of RISC is Reduced Instruction Set Computer. RISC is a computer that only uses simple instructions that can be divide into multiple instructions which perform the low-level operation with a single clock cycle.

► Difference between CISC and RISC

Jack Kilby created the first integrated chip in 1958. Microprocessors were originally launched in the 1970s, with Intel Corporation producing the first commercial microprocessor.

According to history, in order to create a faster computer, certain fundamental improvements in microprocessor architecture occurred, resulting in RISC, which included a standardized syntax for instructions and the ability to efficiently pipeline operations.

(The term “pipelining” refers to the fact that the processor begins executing the next instruction before the current one is completed.) Because memory was expensive in the 1970s, smaller programs were prioritized.

Let’s learn about the difference between RISC and CISC in a detailed manner one by one.

Reduced Instruction Set Computer Processor (RISC) is a microprocessor architecture with a small set of instructions that can be substantially modified.

It is designed to reduce the time it takes for instructions to execute by optimizing and reducing the number of instructions.

It means that each instruction cycle only takes one clock cycle and has three parameters:

The RISC processor can also be used to combine multiple complex instructions into a single one. RISC chips require several transistors, making them less expensive to develop and reducing instruction execution time.

It is a highly specialized set of instructions used in portable devices such as Apple iPod, mobile phones/smartphones, Nintendo DS, and others due to system stability.

The following are some key characteristics of RISC processors:

RISC processors require one CPI to execute each instruction in a computer (Clock per cycle). Each CPI also comprises the methods for fetching, decoding, and executing computer instructions.

In RISC processors, the pipelining approach is used to execute many sections or stages of instructions in order to function more efficiently.

RISC processors are designed with multiple registers that can be utilized to store instructions, respond fast to the computer, and reduce memory interaction.

Must Read ➜ What is Cyclic Redundancy Check (CRC)?

The Intel-developed CISC stands for Complex Instruction Set Computer. It has a huge number of sophisticated instructions, ranging from simple to extremely complicated and specialized at the assembly language level, which takes a long time to execute. As a result, CISC addresses each program by lowering the number of instructions while ignoring the number of cycles per instruction.

Because hardware is always quicker than software, it promotes writing complex instructions directly in hardware. CISC chips, on the other hand, are slower than RISC chips, although they consume fewer instructions. VAX, AMD, Intel x86, and the System/360 are examples of CISC processors.

The following are the RISC processor’s primary characteristics:

Because large programs or instructions require a big amount of memory space to store data, the CISC architecture-based computer is designed to reduce memory costs.

A huge collection of memory raises the memory cost, making them more expensive.

There are many advantages and benefits of CISC.