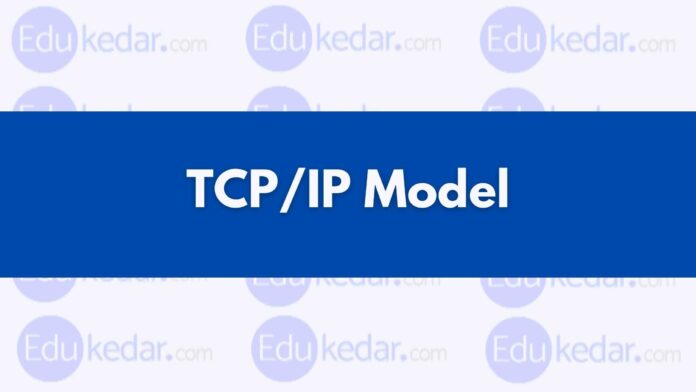 TCP/IP Model stands for Transmission Control Protocol/Internet Protocol Model. The TCP/IP model contains four layers from the seven layers of the OSI model. Hence it is known as a concise version of the OSI model. 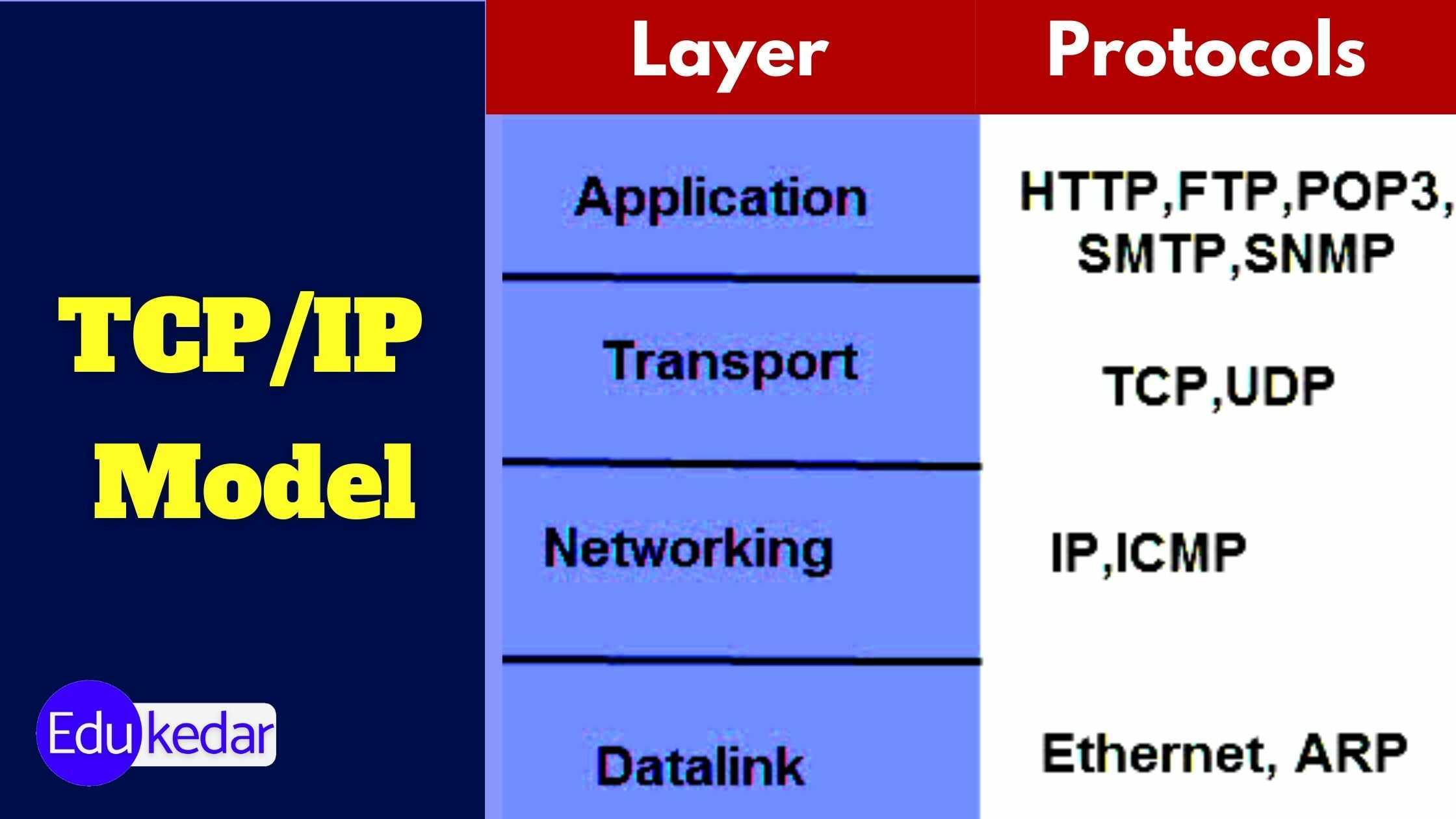 TCP/IP Model is also known as the Internet Protocol Suite because it is the set of communications protocols used in the Internet and similar computer networks.

The current main protocols in the suite are the Transmission Control Protocol and the Internet Protocol.

Each layer within the Internet Protocol Suite has a specific function. When all these layers of the TCP/IP model are combined and transmitted, communication between systems can occur.

Four primary layers of the TCP/IP Model are as follows;

The first four levels, which correspond to the first four layers of the OSI model, including physical standards, network interface, inter-networking, and transport services, and these four layers are represented in the TCP/IP paradigm by a single layer termed the application layer.

TCP/IP is a hierarchical protocol made up of interacting modules, each of which has its own set of features. 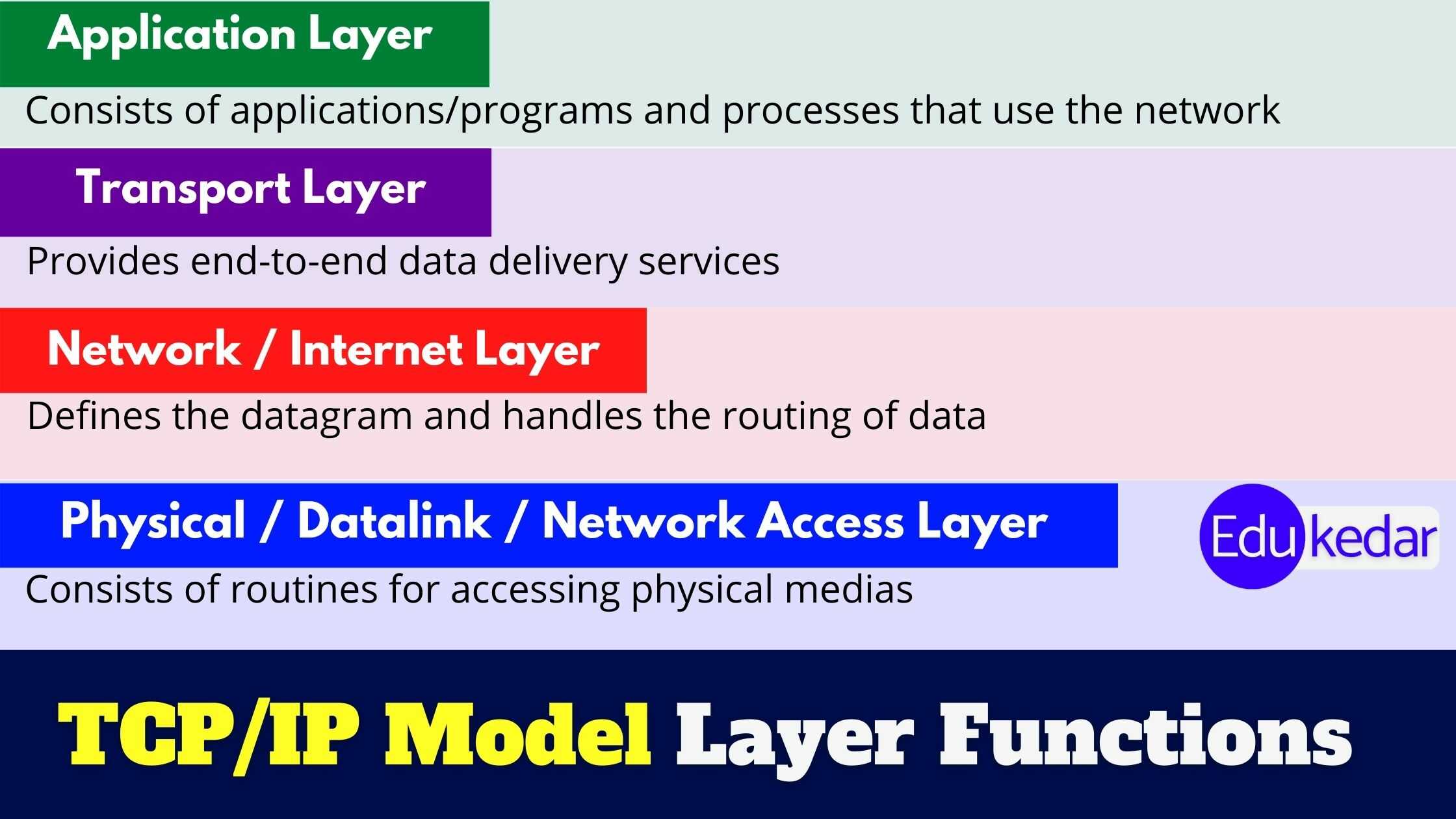 The protocols used at layers in TCP/IP Model are as follows:

IP Protocol: This layer employs the IP protocol, which is the most important component of the TCP/IP suite.

This protocol’s obligations are as follows:

The path along which data is to be transferred is determined by host-to-host communication.

Data Encapsulation and Formatting: The data from the transport layer protocol is accepted by an IP protocol. An IP protocol wraps data into a message known as an IP datagram and ensures that it is transferred and received securely.

The sender or an intermediary router can fragment data. All of the fragments are reassembled at the receiver’s end to make an original message.

ARP is a network layer protocol for determining a physical address based on an IP address.

The ARP Protocol is mostly connected with the two terms:

ARP request: When a sender wants to know the device’s physical address, it sends an ARP request to the network.

It is a method used by hosts or routers to communicate back to the sender notifications about datagram errors.

Until it reaches its destination, a datagram goes from router to router. The ICMP protocol is used to alert the sender that the datagram is undeliverable if a router is unable to route the data due to unexpected conditions such as disabled links, a device on fire, or network congestion.

The most common terms used in an ICMP protocol are:

ICMP Test: The ICMP Test is used to determine whether or not a destination can be reached.

ICMP Reply: The ICMP Reply command is used to determine whether or not the destination device is responding.

The ICMP protocol’s primary function is to notify problems rather than to solve them. The sender bears responsible for the adjustment.

Because the IP datagram carries the addresses of the source and destination but not of the router to which it is sent, ICMP can only transmit messages to the source and not to intermediate routers.

The User Datagram Protocol (UDP) is a protocol that allows (UDP)

The fields that make up UDP are as follows: