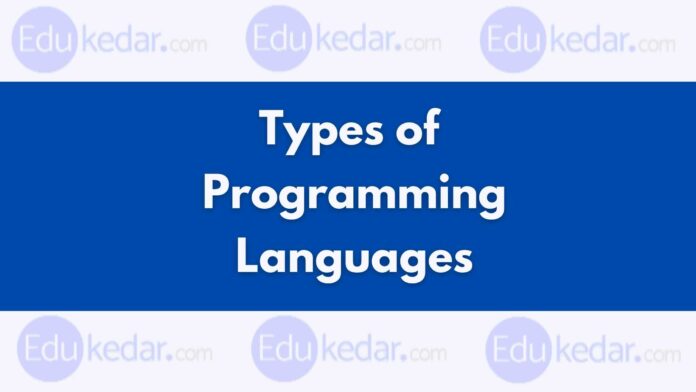 Programming language is a collection of instructions that the CPU (Central Processing Unit) assembles to complete a certain task in a computer. Here we have shared types of programming language with examples. This classification is based on the functions and applications of the language.

The level of abstraction provided by these languages from the hardware varies. Some programming languages offer little or no abstraction, whereas others offer more. 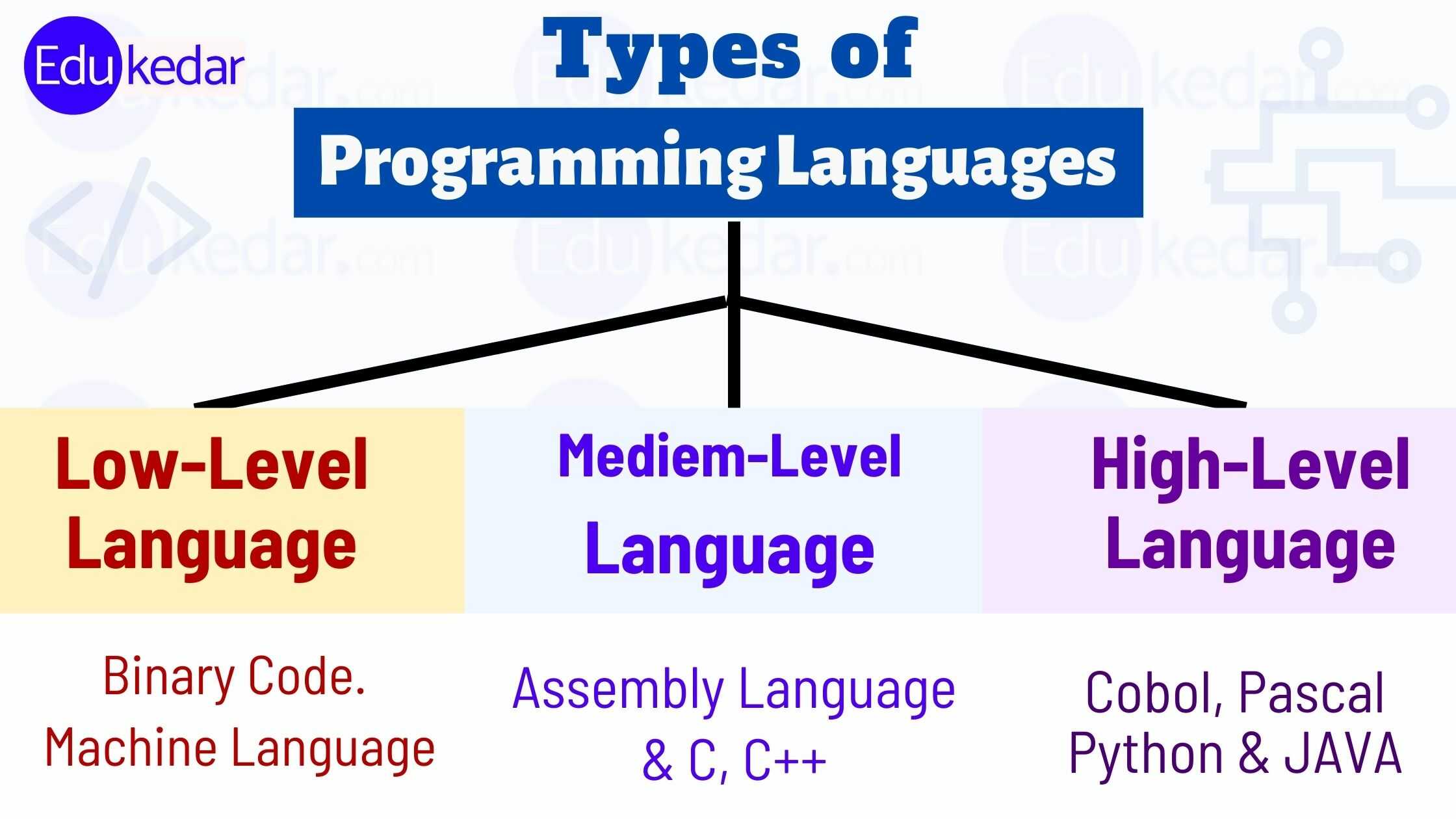 Programming language can be divided into three categories based on the levels of abstraction:

Must Read ➜ Types of Memory in Computer

The low-level language is a programming language that provides no abstraction from the hardware and is represented by machine instructions in 0 and 1 forms.

There are two types of Low-level programming language. The Machine level language and Assembly language are two languages that fall into this category.

A machine-level language is one that consists of a set of binary instructions that are either 0 or 1. Because computers can only read machine instructions in binary digits, i.e., 0 and 1, the instructions sent to the computer must be in binary codes.

A machine-level language is not portable since each computer has its own set of machine instructions, therefore a program written on one computer will no longer work on another.

For example, a PowerPC processor has a RISC architecture, which necessitates a different code than an Intel x86 processor with a CISC design.

Because the data is stored in computer registers, and the computer must be aware of the varied sets of registers, the assembly language code is not portable.

A high-level language is a programming language that allows a programmer to create programs that are not dependent on the type of computer they are running on.

When writing a program in a high-level language, the logic of the problem must be given complete attention.

Must Read ➜ What is Multiprocessor?

► Other Types of Programming Language.

There are few other programming languages that are known by their name of generation. A few of them are listed as follows;

A procedure is a set of instructions with its own name. The procedure’s instructions are carried out using the name as a reference.

The program instructions in procedural programming languages are written in a certain order in which they must be executed to solve a certain problem. It signifies that the sequence in which computer instructions are executed is critical.

The following are some examples of popular procedural languages:

Pascal is a computer language named after Blaise Pascal, a physicist and mathematician who built the first mechanical calculator. In 1971, structured programming language became prominent in the field of computer science. It is appropriate for use in the scientific field.

ADA – it was created in 1980 and was named after Lady Augusta ADA. She was the first person to program a computer. Pascal, a high-level structuring language, served as a basis for the creation of the ADA language. This language is mostly used in Defence applications, such as commanding military weaponry such as missiles.

The C program can be compiled and executed on any type of machine.

Non-Procedural is also a type of Programming Language

The user/programmer uses a non-procedural language to access data from databases by writing English-like instructions.

These are more user-friendly than procedural languages. These languages give easy-to-use programming tools for creating instructions. The programmers do not need to spend a lot of time coding it.

The following are the most important non-procedural languages and tools:

SQL is a widely used database access language that is designed to read and alter database data. The word query denotes that this language is used to make queries (or inquiries) on database data to execute various operations.

SQL, on the other hand, can be used to create tables, add data, delete data, and update data in database tables, among other things.

The report program generator is abbreviated as RPG. IBM developed this language to generate business reports. RPG is typically used to construct applications for IBM midrange systems, such as the AS/400.

OOPs (Another type of Programming Language)

OOPs stands for Object-Oriented Programming Languages. The concept of object-oriented programming was first established in the late 1960s, but it has since become the most prevalent method of software development.

Software is constructed utilizing a collection of interface objects in object-oriented programming.

An object is a program component that consists of a group of modules and a data structure.

C++ and Java are the most popular and widely used object-oriented programming (OOPs) languages today.